Hopefully I've just finished my last post in Amsterdam where this tale takes off. I activated my Eurail train pass and organised my travel arrangements to Valencia, Spain. The train pass was a great investment. So far I've used to to get from Amsterdam to Valencia and from Valencia to Madrid. It cost me $1400 Australian for the continuous 3 month pass, but since I've had It for a week and I've rocked up what would have been approximately €200 of train travel costs, I think it will prove to be a solid investment.

Anyway, I overnighted in Brussels (the city in Belgium, not the sprouts). I wouldn't really say I experienced or even really saw Brussels since I got there in the mid-afternoon, went straight onto my cheap hotel (where I had a whole room gloriously to myself) and slept most of the time. Some might say it was a waste of time when Belgium is such a beautiful country, but after spending the last 34 days on a bus with 46 other people, it was truly amazing. 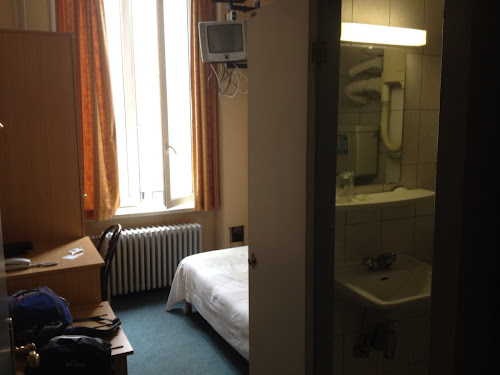 Before we go any further, I'll give you a quick Spanish lesson. It's on the house. First, stick your tongue out as far as it goes. Next, pinch your tongue between your thumb and forefinger. Now try and say "Valencia". If it sounded lie 'Balenthia' then congratulations, you said it right.

The next day was the long leg of the trip to Valencia begining at 10:17am at Brussels's international train station and ending at 1:43am at Valencia's Estacio de Nord. I checked into my cheap hostel for the night and enjoyed my few hours of sleep. The next day I explored Valencia a little, mostly just walking through the streets of old town before I checked into the hotel where my La Tomantina Top Deck group was staying. Yes, a hotel. A 4 star hotel. After over a month of camping, it was glorious.

I should explain what exactly I'm in Valencia for. La Tomantina is a festival held every year in the small town of Buñol, about an hour out of Valencia. I don't really know how it started or when (although I'm sure a brief google search would be able to tell me) but essentially thousands of people gather in the very small, narrow streets of Buñol and throw tomatoes at each other. To put some numbers on it, that's 20,000 people (there were 45,000 people last year before they began ticketing the event) throwing 40,000 tons of tomatoes at each other. Why? Because Spain. That's why.

I checked into my hotel and met some of the other people on the tour. There are a few people who I knew were in Valencia for tomantina as well, including Amy who was on my last top deck tour. I'm sure I'll find an embarrassing photo of her to include here. I've noticed I don't use people's names much on here so I'm going to try and do that more. I also met a lot of cool people who I will hopefully meet up with again later in the trip. Everyone is friendly when you're backpacking because everyone is in the same boat. 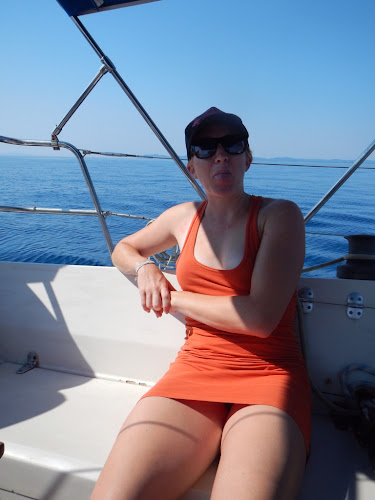 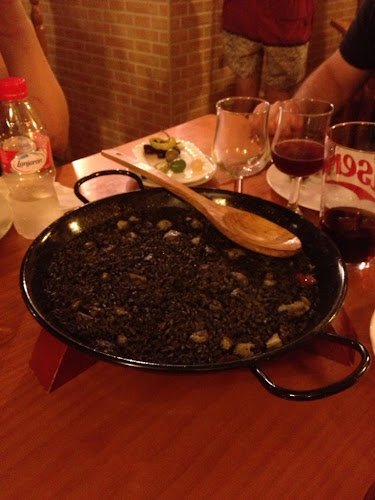 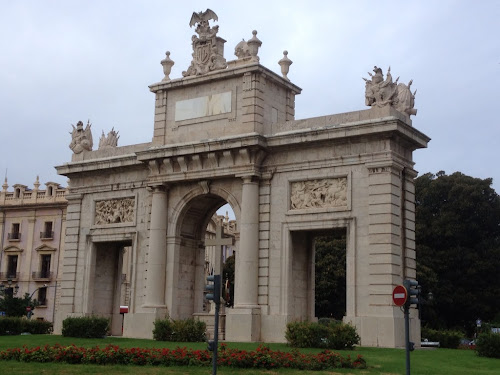 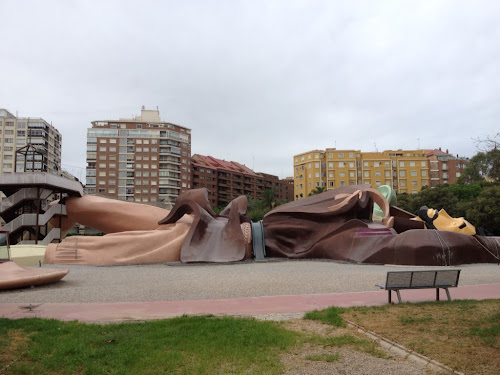 That's a playground for children/drunk adults 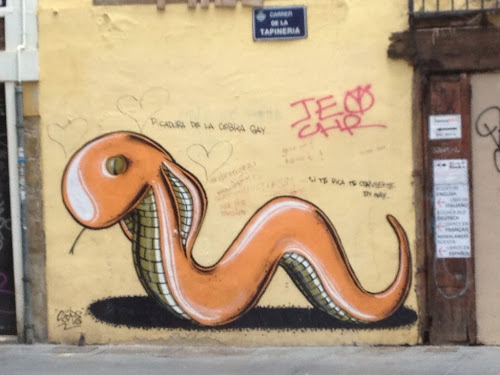 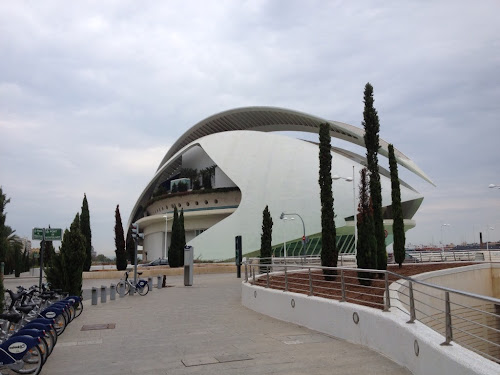 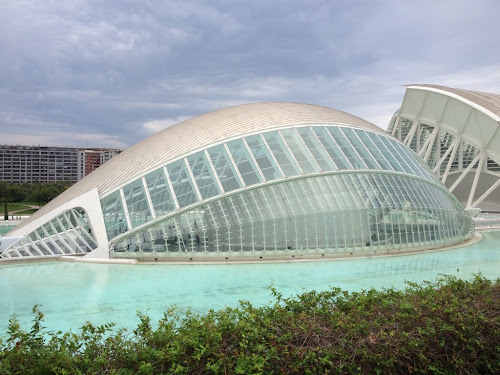 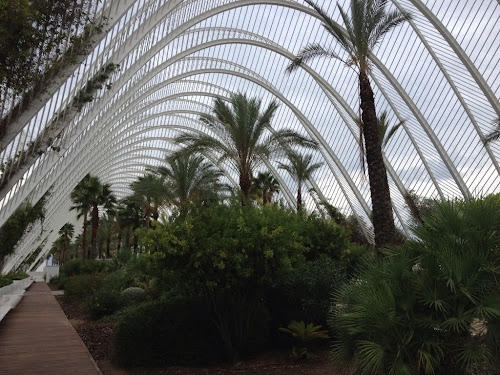 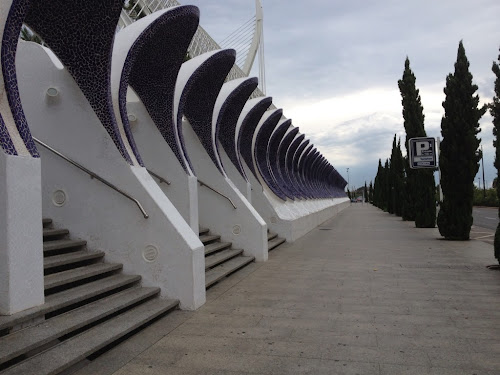 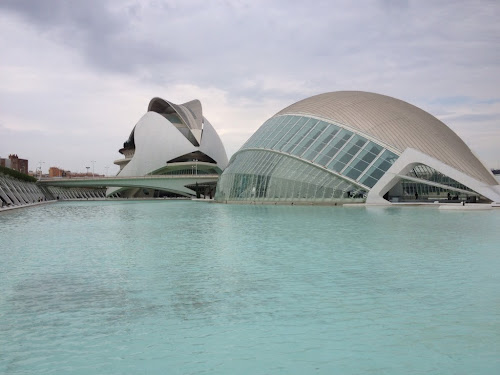 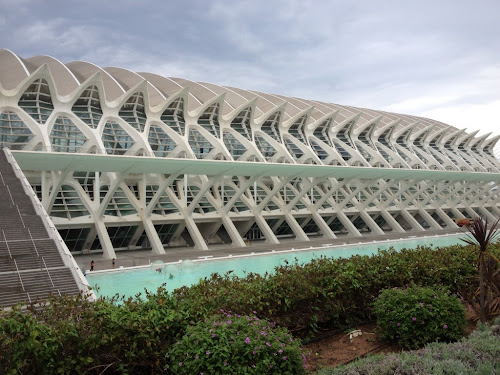 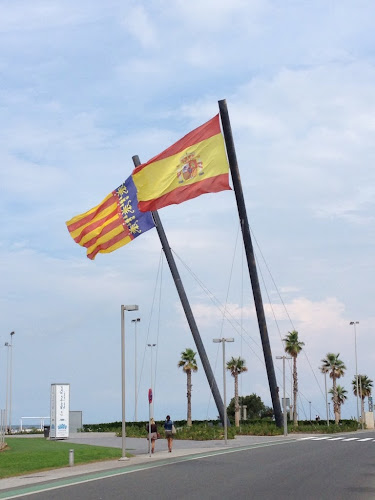 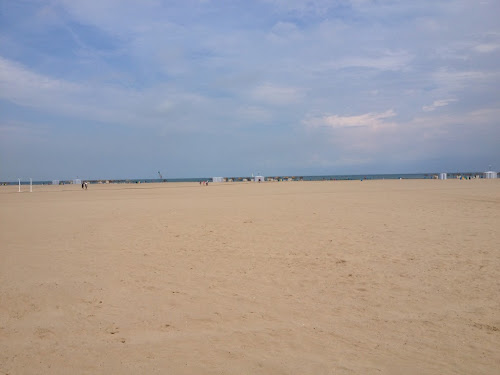 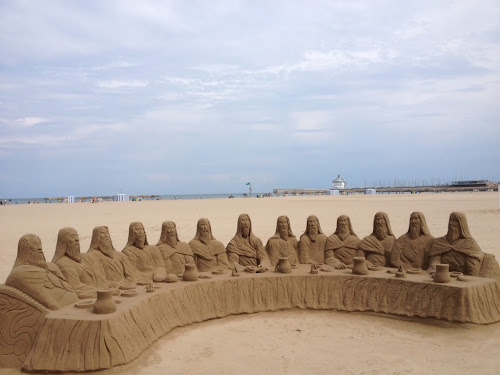 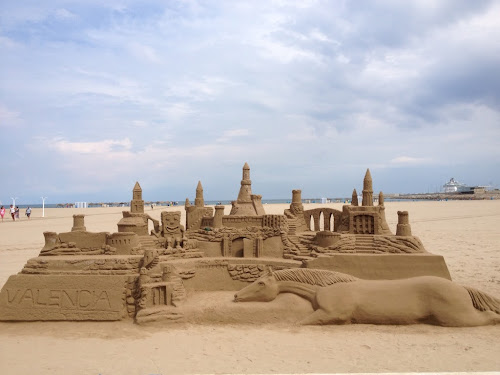 Anyway, of Valencia I will say this. It's a nice little town with some very interesting modern buildings but as far as being a town full of tourist attractions...not so much. I spent almost a week in Valencia all up but I didn't need all that. I have, however, developed an affinity for sangria which is strange since I'm not really a fan of 1) red wine, 2) sweet things or 3) chunks of things floating in my drink. I will admit, a large portion of our days were spent in shops that sell sangria.

On the actual day of la tomantina, we bussed to Buñol early in the morning since the fight starts at 11am and we wanted to all be in a good position. Well, technically the fight begins at 11 or when someone managed to retrieve a frozen ham from the top of a very tall, greased up wooden pole (which never happened). In the fight and afterwards I managed to run into most of the people I knew from the previous top deck tour (about 6 of us in all) as well as some others I've mentioned before. In keeping with my commitment to start using people's names, i think I've mention Alexa before in my typically vague and nameless style. She and her friend Michelle were staying in our campground in Florence and were also in Dubrovnik when we were there. I hadn't actually met Michelle at this point, although I ran into both of them leaving tomantina and we made plans to catch up later that night, which we did. 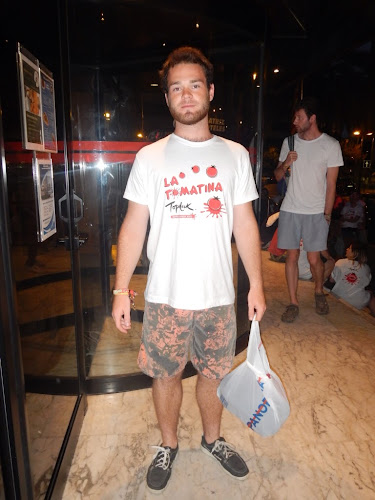 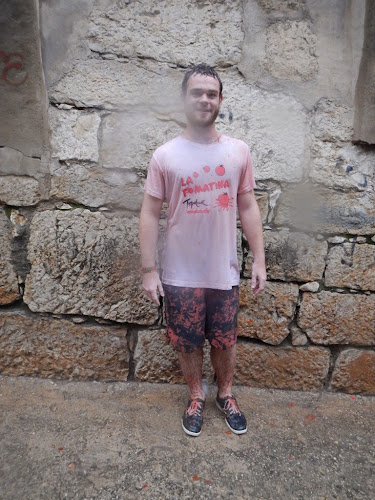 After (and after being hosed off) 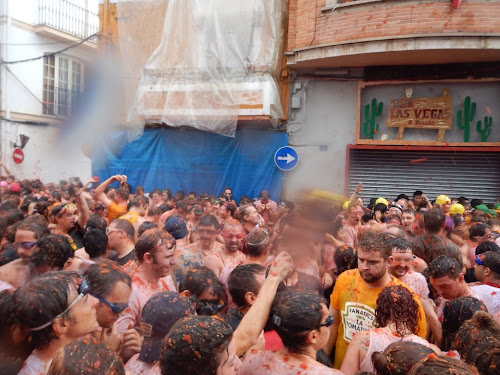 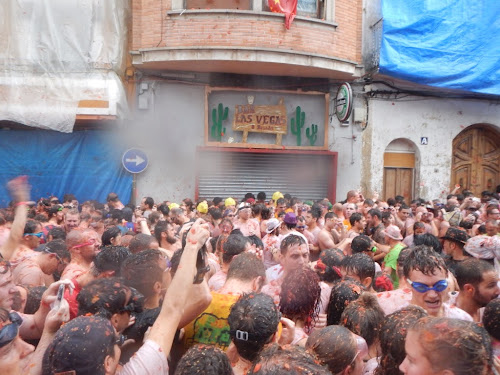 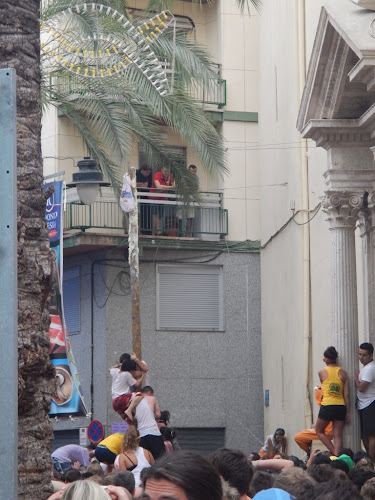 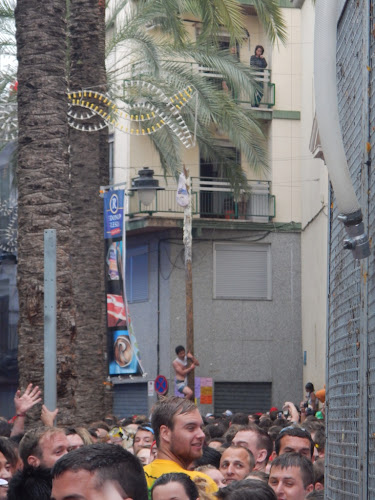 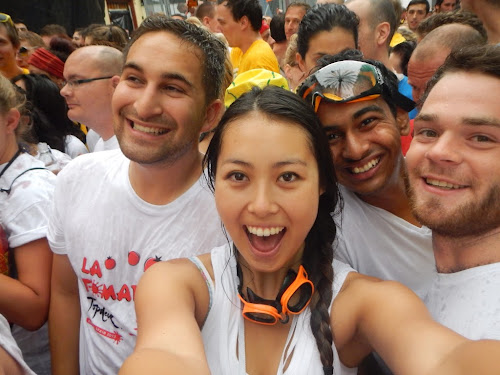 Rob, Tash, Nachiket and myself. See, I do know people's names! 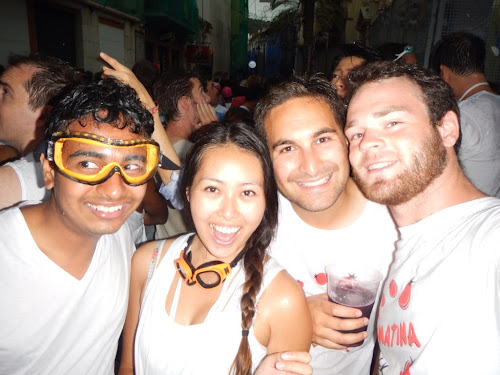 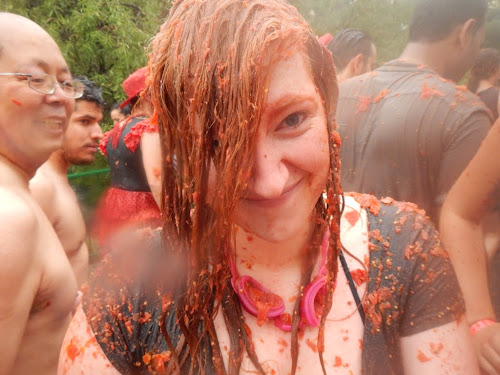 Alexa. I didn't get one of Michelle but she's really tall. 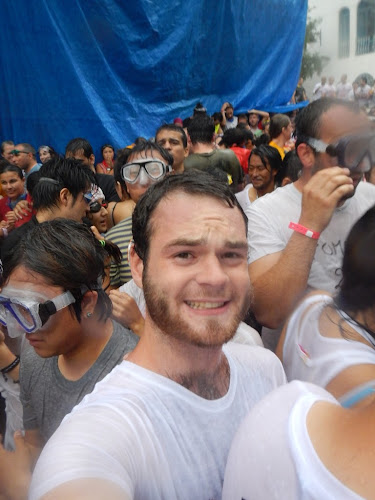 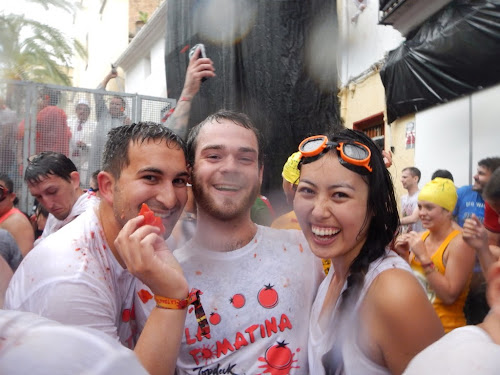 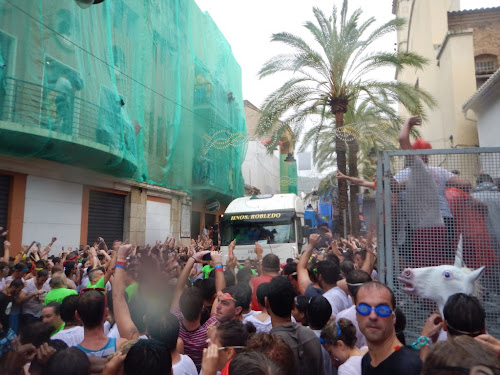 Literally just throwing tomatoes off the back of dumptrucks 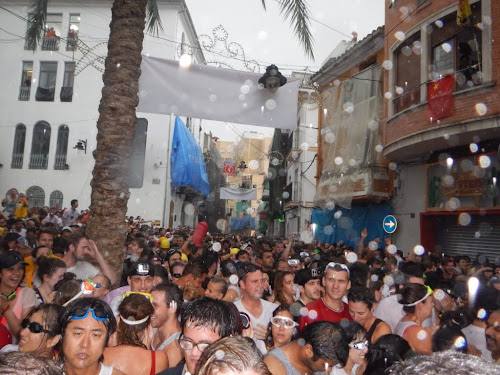 I really enjoyed my time in Valencia, not only because of la tomantina or because Valencia really is a beautiful city. I'm really beginning to appreciate the community culture of backpacking. I'm traveling entirely on my own, yet I never feel like it because there is such a camaraderie between people in the same boat. To illustrate this point and make this post easily the longest I've written yet, I have another piece of writing to share. Recently, a friend of a friend contacted me through Facebook to ask a favour. She is in year 12 and has apparently been keeping up with my blog. For anyone unfamiliar with the NSW final exams for English, there is always a large essay-based component about "belonging" and the more creative you are with your 'sources' to use in your essay, the better you generally do. She asked me to send a postcard from Europe wherein I am discussing my feelings about traveling alone and missing home to use as a 'source' about "belonging". Obviously the writing style is a little stilted and aimed towards being useful in an essay (not to mention being brief enough to be scribbled onto a postcard), but in writing the following I really began to appreciate how true it is. This isn't just a trip where I'm going to places and seeing things. This trip is just as much about the people I meet as it is the places I go, which is one of the reasons I want to focus more on the people on this blog.

Europe is amazing! I'm loving every day here because every day is something new and exciting. So far I've pass through 20 countries on this trip and it really just highlights not just the differences between cultures but the similarities. Traveling really forces you to gain some perspective about the world and your place in it. Not only that, but I've noticed I'm definitely developing as a person. This is my first real step out into the world where I am completely alone. Any family or friends I had before two months ago are literally a world away but I don't feel isolated. In fact, despite the fact that I am traveling completely alone in every sense of the word, I have met so many fellow travelers and made so many friends in the same position that its impossible to not feel as sense of belonging to a larger community. Every hostel is like stepping into a new but familiar home and every fellow backpacker is a lifelong friend, even though our time together might only be as fleeting. Is difficult to describe the camaraderie of strangers in a situation like this if you've never experienced it before but I've learned that home really is wherever you make it." 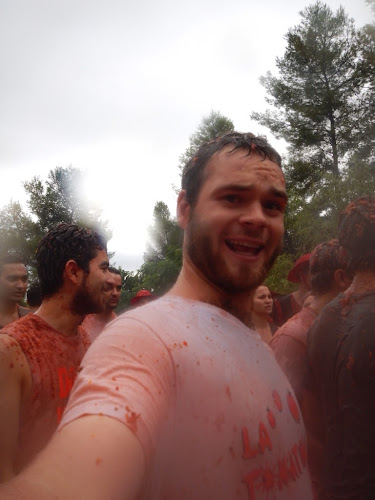 Ps. This doesn't mean everyone else should start expecting to receive postcards. There's nothing I could have to say that can't be expressed through the convenience and emotional detachment of electronic mail.

Posted with Blogsy
Posted by Les Betchos at Monday, September 16, 2013