Lagos Around, Comes Around

Wanting to explore more of Portugal, I decided to head south to the smallish town of Lagos on the south-west coast of Portugal (and Europe in general). I felt a few days lounging by the ocean on what I heard were some of Europe's best beaches in the sun might be a welcome change from the bustle of large European cities. To clinch the deal, one Englishman I met in Lisbon as 'Lagos is to England what Bali is to Australia'. Now, I've never been to Bali but even I could tell a glowing endorsement when I hear one so the next day I boarded a train for Lagos. 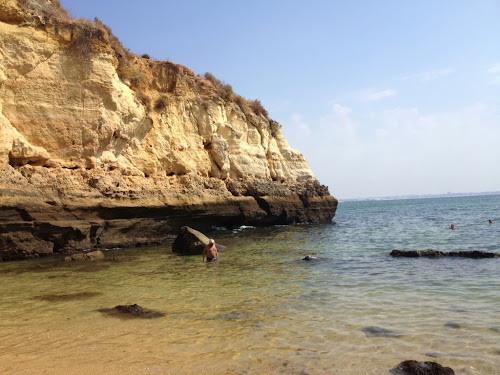 You could say my expectations were fairly high when I arrived at Lagos train station and honestly I was not disappointed. The town itself is a typical holiday town that exists only because of tourism but is not yet so big as to have become over-commercialised yet. The beaches were indeed the best I have seen so far in Europe (although they didn't come close to some beaches I've been to in Australia but I guess I'm just spoilt like that). The weather was fantastic and, like everything in Portugal, it was fairly cheap on account of the country being broke. I've stayed in a lot of hostels on this trip but to date, the Bura Surfhouse Hostel is far and away the best I've stayed in in practically every possible way of measuring. The building and facilities were great, the staff were amazing, the location was good and the people I met there might be reading this so they were pretty good too. Just kidding, they were great as well. In particular, my room mates Nathan (from Australia of course), Hayley, Haley and Ashley (Washington State, USA) and Ruth, Zoe and Lora (Bruges, Belgium) made my time in Lagos even more enjoyable. 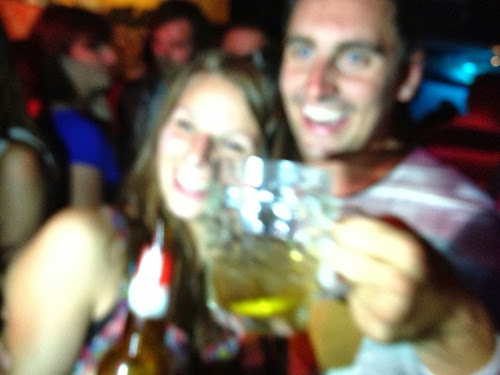 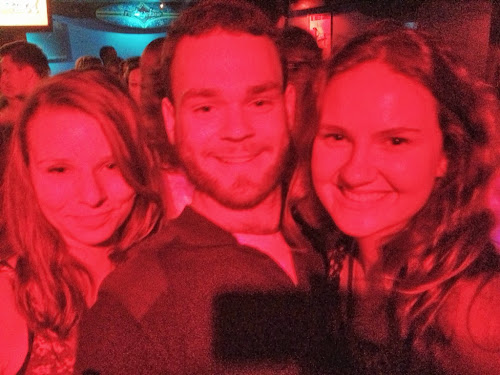 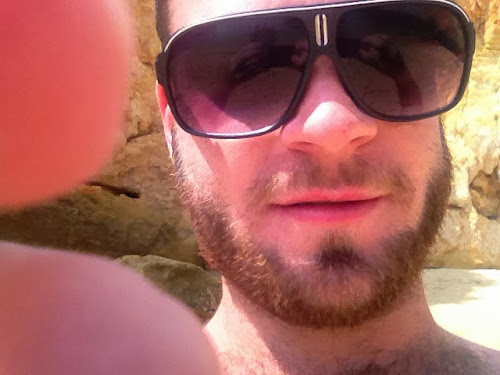 My time in Lagos was mostly spent at bars at night and the beach during the day and it was nice to be able to kick back and relax without feeling obliged to get up early each morning to go explore (I know, my life is tough, right?). On my final morning in Lagos, one of the hostel staff took me aside and told me completely seriously that if I wanted to stay, there was a job at the hostel for me. I'll be honest, I gave it some serious consideration and if I'd had a working visa and hadn't already paid for a large part of the rest of my trip I might have taken him up on the offer. Instead I politely and regretfully declined, although I did share some Vegemite with him as thanks (most of the staff were Aussies and Poms).

The train trip back to Lisbon was slightly longer than I expected. To get to Lisbon, I had to catch the train from Lagos and change trains at Tunes for Lisbon. Unfortunately, I fell asleep on the train to Tunes and woke up an hour later in Faro. Yu don't really need to worry about the geography of these towns because I'll just explain 1) Faro is the opposite direction of Lisbon and 2) there were no more trains to Lisbon from Faro that day. As a result, I had an unexpected layover in Faro which was definitely not the end of the world. That having been said, it would have been nice if I didn't pay my Lisbon accommodation in advance. I obviously did something to anger the train gods because my train troubles in Portugal weren't yet over (I'll get to that later).

I caught the first train from Faro to Lisbon and arrived by mid-morning. I checked into my hostel and was reminded through Facebook that Alexa had also arrived in Lisbon that morning (Michelle was arriving that night as she had been at a wedding). I had already mentioned my newfound love of Lisbon to them and they seemed skeptical so the afternoon was spent playing tour guide (I basically retraced the tour I did with Taylor 5 days earlier and regurgitated his information). I'm pretty sure Alexa was won over by the city quite early on in the tour. 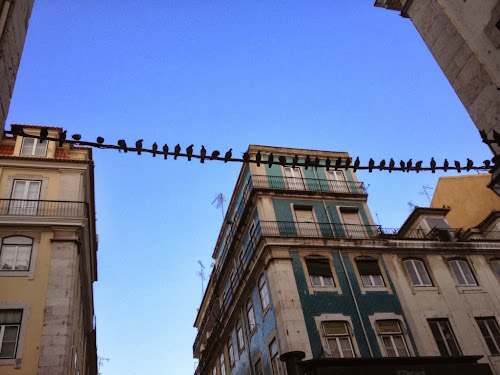 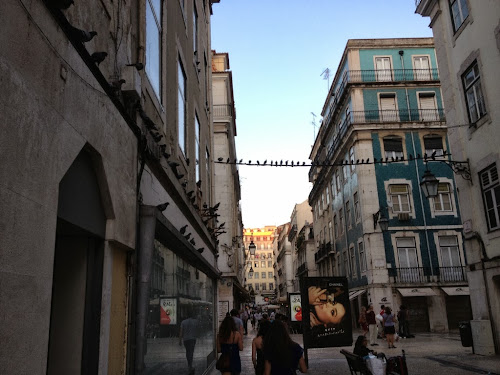 Birds on a wire just reminds me if that Pixar short

The next day, which was supposed to be my last in Portugal, Alexa, Michelle and I caught the train to the small town of Sintra in the Portuguese mountains. Almost one thousand years ago, the Moors built a fortress in the mountains. Eventually the Portuguese built one next door. Years later, the king of Portugal decided to build his summer mansion in Sintra and a string of wealthy merchants and Portuguese nobility did likewise. Today, Sintra has countless old mansions, castles, forts and ruins in various conditions scattered across the town and its mountains. Despite being the oldest, the Moorish fort is still the most impressive given its high altitude and amazing viewpoints. 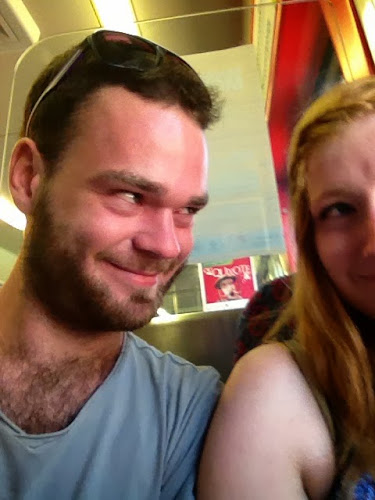 How's that for an amazing viewpoint? 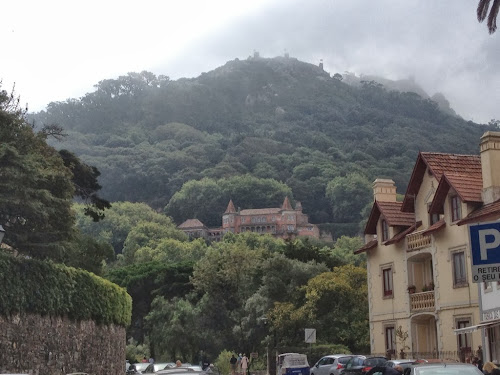 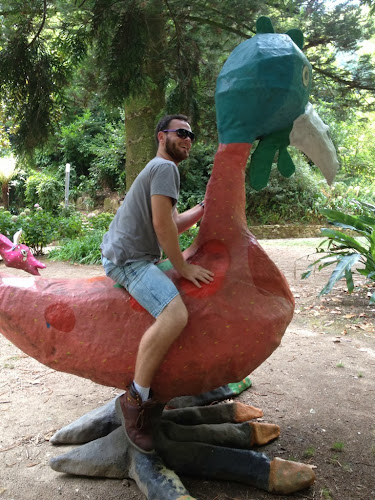 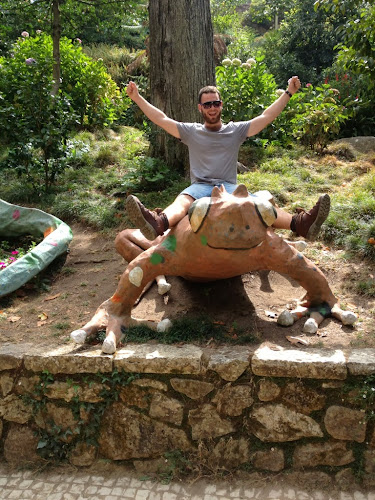 If I'm being honest, the high point of my day 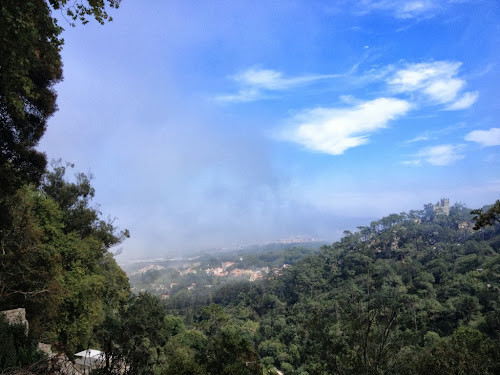 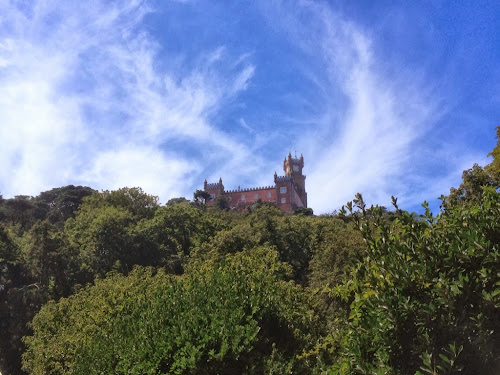 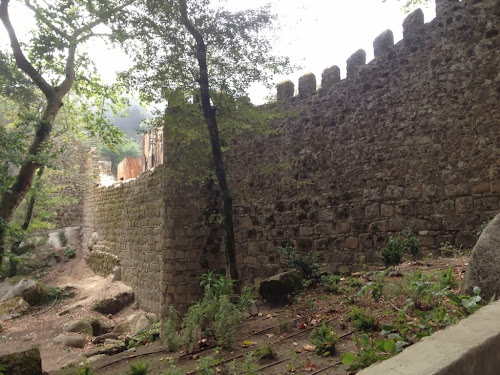 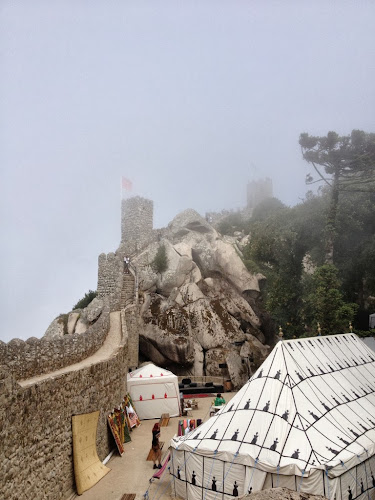 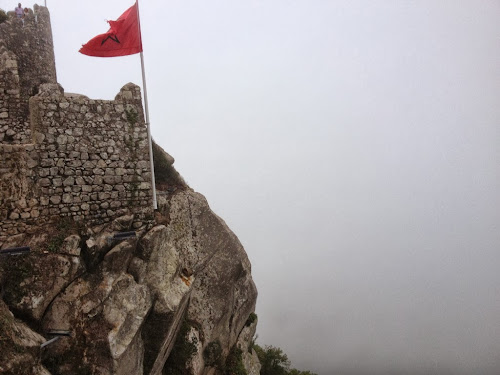 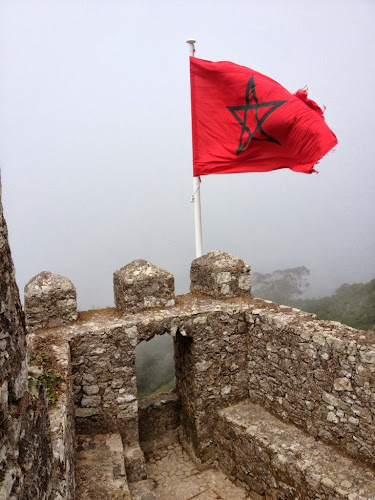 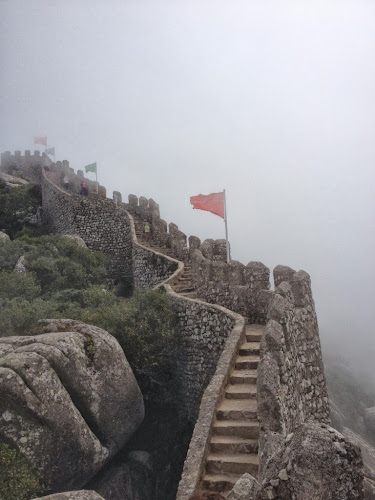 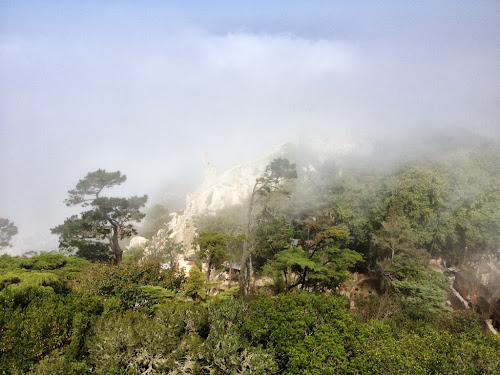 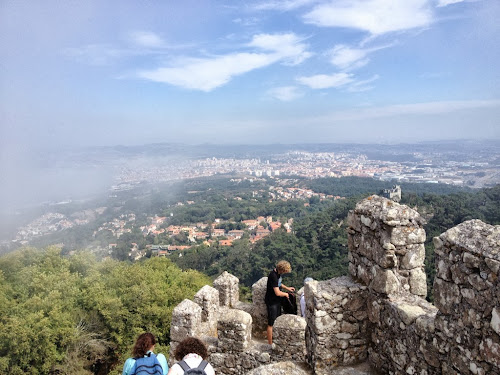 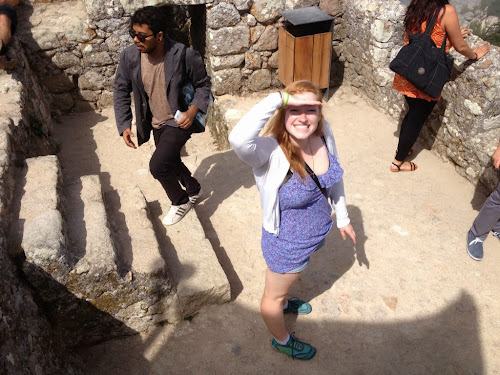 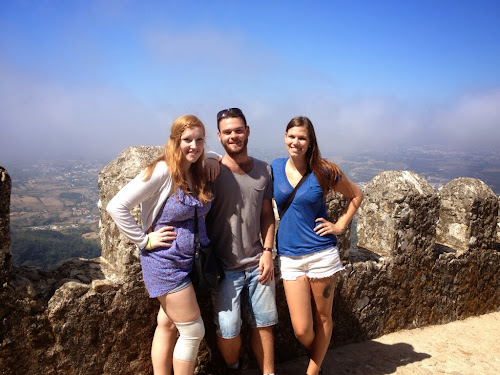 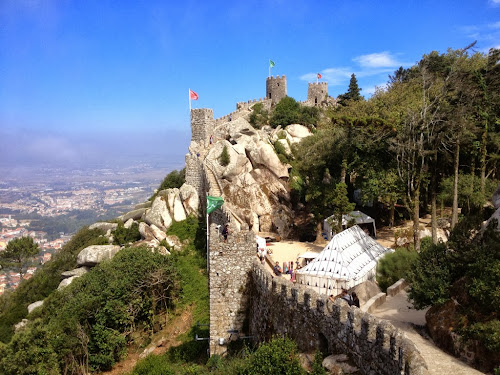 When we got back to Lisbon late that afternoon, I said goodbye to Alexa and Michelle for the final time and went back to my hostel to retrieve my bags and head into the station for my dreaded night train back to Madrid. It was only after I got to Santa Apolonia station that I learned that the night train back to Madrid had just sold out and I would have to wait for the next train to Madrid. When was the next available train to Madrid? The following night's night train. All I could do was reserve a spot on the the next nights train and spend another night and day in Lisbon (not a horrible prospect if I'm being honest).

The following day, I was once again reminded by Facebook of how popular I was because more people I knew were flying into Lisbon that morning. This time it was the American girls I met in Lagos (the confusingly named Hayley, Haley and Ashley). Once again I acted as your guide through Lagos. I had mentioned to them also how Lisbon was my favourite city in Europe and before I even met up with them, they had already been converted*. 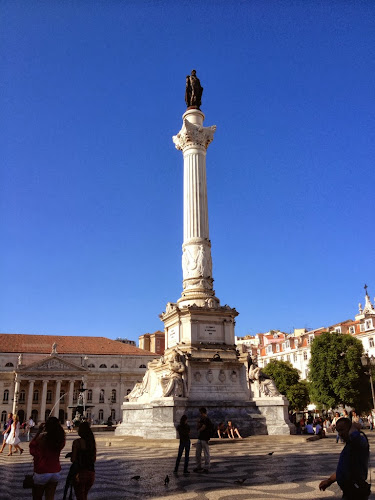 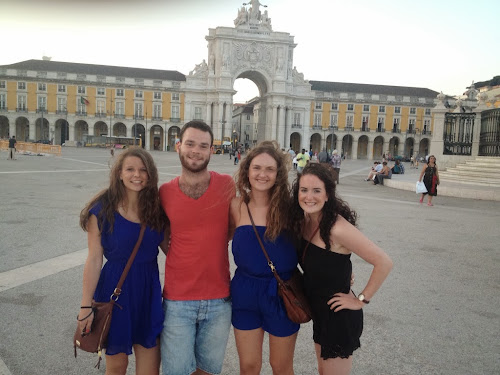 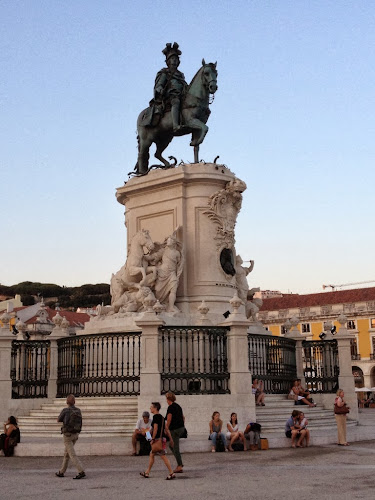 After another full day of exploring Lisbon with friends I collected my bags from the hostel and once again made my way to the train station to catch the train back to Madrid. This was a marginally more successful endeavor because, on the one hand I did actually manage to catch this train. One the other hand, it was quite uncomfortable and I barely slept. I have no intention of catching any more night trains unless they come with proper beds (which some do). Still, my time in Portugal more than justified the trip their and back. 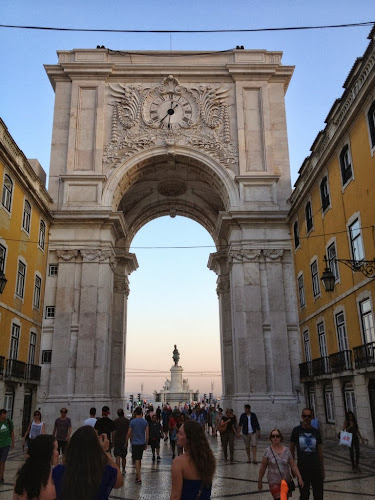 *two friend who (*spoilers*) I meet up with in Madrid in the next chapter also head to Lisbon a few days later. Like everyone else, they were skeptical when I sung Lisbons praise but I received a message on Facebook afterward saying that I was pretty right about Lisbon and they love it too. I clearly have good taste in cities.

Posted with Blogsy
Posted by Les Betchos at Wednesday, September 25, 2013