It Is What It Istanbul

The last time I had flown on this trip was almost three months before but, curiously, it had also been from Budapest airport. That flight, however, had been at a much more civilised hour. The flight to Istanbul left shorty after 7:30am. As with most plane trips, I fell asleep during take-off and didn't wake up until we were taxiing towards the terminal at Istanbul's Sabiha International Airport shortly after 10am local time. Coming through customs was a fairly painless procedure when compared to customs in America or the United Kingdom. In my passport there are 37 pages that customs officers can stamp. Instead of just stamping over old stamps on the first 4 pages making an illegible smudge like most customs offices do, the mustachioed Turkish customs officer turned straight to page 36 to stamp my passport and attach my visa sticker.

I didn't know what to expect from Turkey. I knew it would be different in a whole new way from any country I'd been to before but beyond that I had no idea. To really experience a country and a culture, it helps to do two things; speak the language to get out of the main cities. These things, I felt sure, would go especially for a country so diverse and culturally different as Turkey. It was for this reason that I decided to join another tour. I know I do a lot of tours but they really are a fantastic way to travel around a foreign country and gain a more full appreciation of the culture as a whole. I have no doubt that had I been on my own I would not have seen half as much.

The company I elected to travel with is called Intrepid. I'd heard of the, before but didn't really know much about them. As the tour season is winding down, tours are becoming less frequent and the intrepid itinerary and tour dates matched my plans and what I wanted to see in Turkey perfectly. In my research I also got the distinct and correct impression that Intrepid takes the actual cultural experience far more seriously than companies like Top Deck or Contiki where the ultimate goal is just to have fun on a tour bus in a large group whether you experience the local county or not. Tour sizes for Intrepid are much smaller with only local guides and a much more authentic and in-depth itinerary. The trip also goes for two weeks and travels off the well-worn tourist trail in many places.

The officially started that afternoon at the hotel we were staying at in Istanbul. For the duration of the trip we would be staying in hotels although only cheap ones which suited me fine. It's still a step up from hostels. Atleast I have a room to myself in every place. That evening I met the rest of the people with whom I would be spending the next two weeks. There was only 8 of us plus our guide. Steve and Marjory and David and Jenny are both retired couples from Sydney. Tera and Francois are married, in their thirties and from Ottawa. Deborah is also in her thirties and traveling alone. Yenner, our tour guide, has lived in Turkey all his life but his English is quite good. In fact, between working for an Australian tour company full of Australian tourists and having an Australian girlfriend in Sydney, you might say Yenner is as true blue, ocka or fair dinkum' (or some combination of all three) as I am.

Look, yes, before you say anything I was a little... Not disappointed but not exactly thrilled with the age dynamics in the group. From the offset I could tell they were all nice people but the age gaps did strike me as a it of a downer. They dynamics would obviously be different to my experiences with Top Deck. That night we all went to dinner and got to know each other before going back to the hotel for what would not be my last early night of the trip.

The next day we explored Istanbul. Istanbul is an incredibly vibrant city of fifteen million people divided by water into three distinct areas across two continents. I can see why James Bond keeps coming back here. It's also a very openly devout country. There are mosques seemingly on every street corner and the call to prayer can be heard anywhere in the city five times a day. Yenner was a good tour guide, however. He showed us around to where most of the main tourist attractions were then we all spilt up to explore on our own. Knowing that I would have had almost a week in Istanbul when we finished the tour, I look it all in at a rather leisurely pace and subsequently enjoyed a relaxed day. The highlights of the day for me were the Blue Mosque, Suleiman the Magnificent Mosque and the Grand Bazaar. 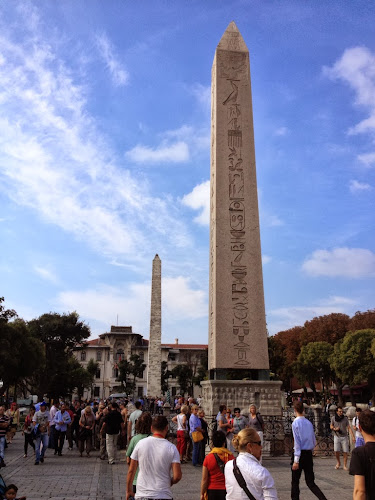 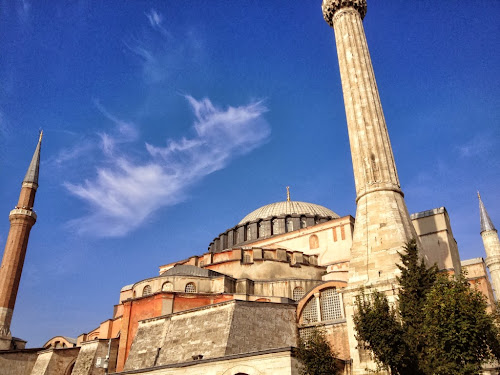 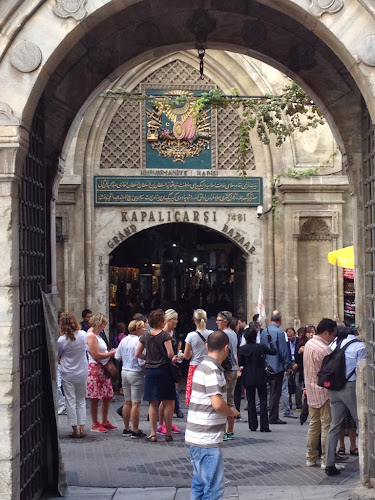 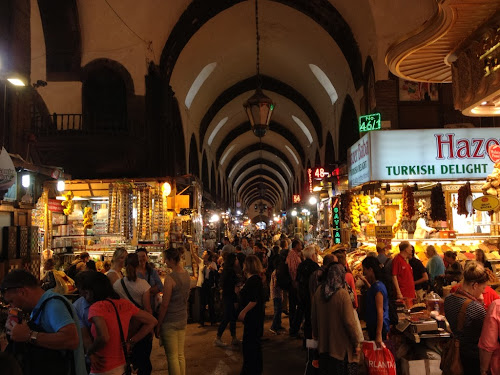 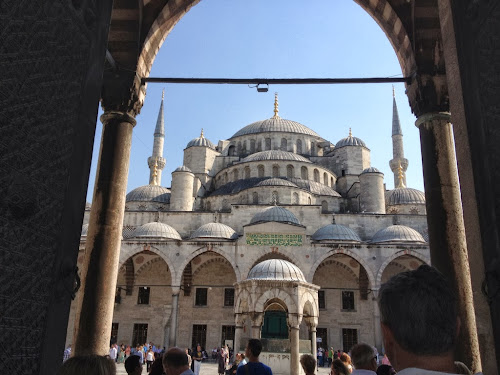 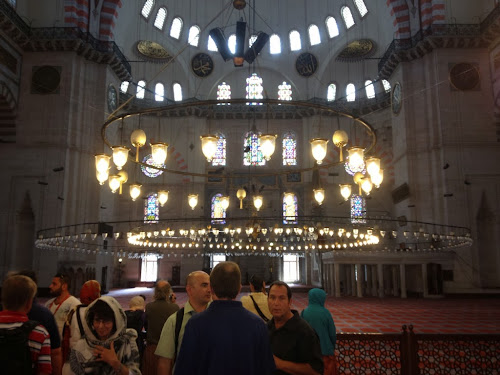 That afternoon I got a Facebook message from Tom, who I had met on Top Deck. 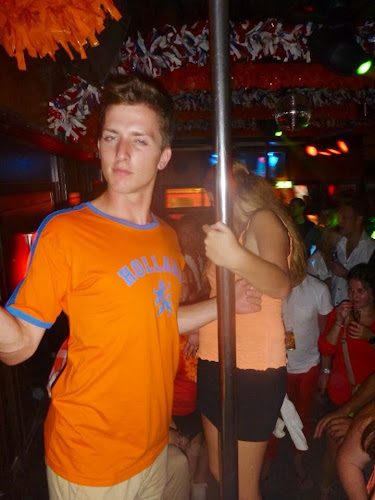 He had just arrived in Istanbul and asked if I wanted to catch up. Since I was leaving early the next morning, we agreed to meet for dinner. We met at Galata Tower (another impressive Istanbul landmark and the site of the first sustained human flight) and found a local restaurant heavily recommended on trip advisor. I use the term "restaurant" very loosely here. In reality it was literally just a family's kitchen/dining room in which they had set up a few small tables. It was staffed entirely by the family who lived there and there was no menu because the only food available was what the mother had already cooked. If that sounds sketchy, you're entirely right. It was, however, absolutely amazing food. Like, honestly probably the best meal I've had since in Turkey. Maybe even the whole trip. Like, seriously it was amazing. Also, between two people it cost $17 AUD for a three course meal between two people plus drinks which was nice too. 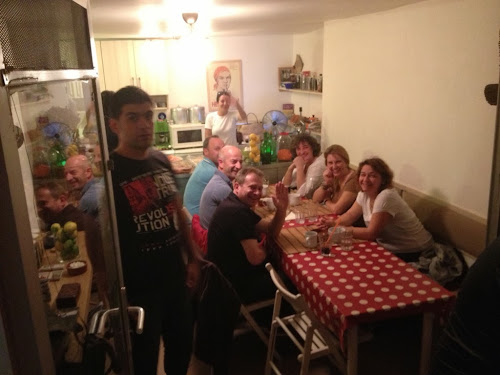 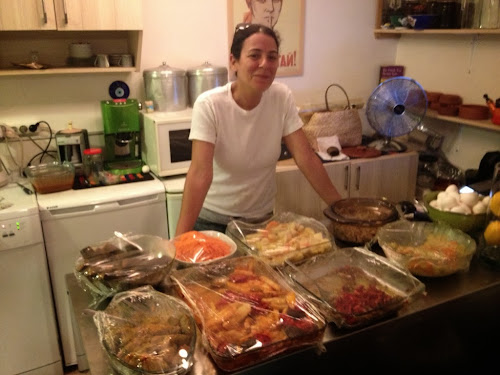 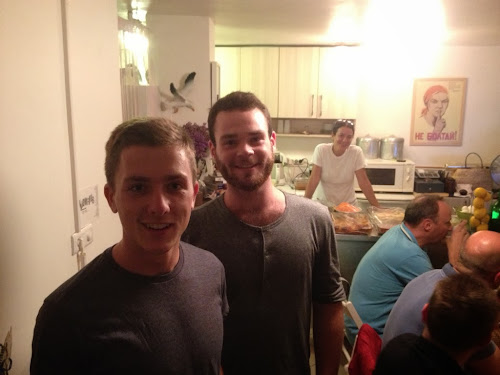 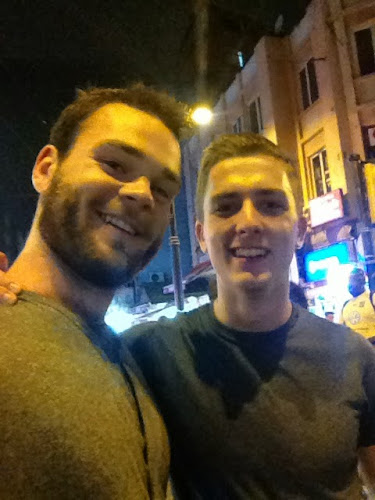 The next day we caught an early ferry and then a bus to the town of Bursa, south of Istanbul. Bursa isn't a large town and we were only there for one night. Bursa does have two very distinctly Turkish things though. Firstly, it has a large and original hamami (bath house) and it has one of the few remaining Whirling Dervishes lodges in Turkey.

The hamami was an interesting experience. I'd been to the Turkish baths in Budpest but these were quite different. For one thing, the baths are separated into men and women's sections and bathing suits are discouraged. The only thing they give you to wear is a small towel only marginally larger than a tea towel. Also different, you get a vigorous (read painful) massage and a vigorous full body scrubbing with a coarse loofer. On the plus side, small amount of remaining skin I had left felt silky smooth. Obviously I didn't take photos in the bath house, blog be damned.

That night we all walked to the Whirling Dervishes lodge. For anyone who doesn't know what a Whirling Dervisher is, you should probably just google it. As far as my understanding goes, Dervishers were Islamic imams that would wander from town to town in search of finding a meaningful connection to Allah/God. I believe that a particular sect of these Dervishers became pretty die-hard fans of an Afghan poet named Rumi who, in addition to writing some beautiful and religiously significant poetry, went crazy and started spinning in circle to find God. Naturally, hundreds of grown men followed his example and the practice is still followed today in a very small number of places. The actual dancing and spinning was pretty incredible with six spinners ranting from about six to about twenty whirling and spinning for probably half an hour in time with the rhythmic music and chanting of the special whirling band. Unfortunately we had to sit through two hours of lecture (in Turkish) from an apparently well known imam. If that sounds like I didn't enjoy it, I'll repeat it was in Turkish and went for two hours. Also, he was described to me as "a Turkish George Pell", he claimed the Earth was a million years old and anyone who says different is a fool and several women in the audience left in tears.

Anyway, I'll leave the story there. Plenty more of Turkey to come.

Posted with Blogsy
Posted by Les Betchos at Sunday, October 13, 2013