As I alighted the morning train from Frankfurt to Munich, I really didn't know what to expect. This was Oktoberfest, ya' know. It's a bunch of drunk German guys sitting inside drinking beer all day? I mean, I like Germans, I like beer and I have been known to enjoy the occasional sit but does it really require a three week festival? As I would discover, yes it most definitely does. 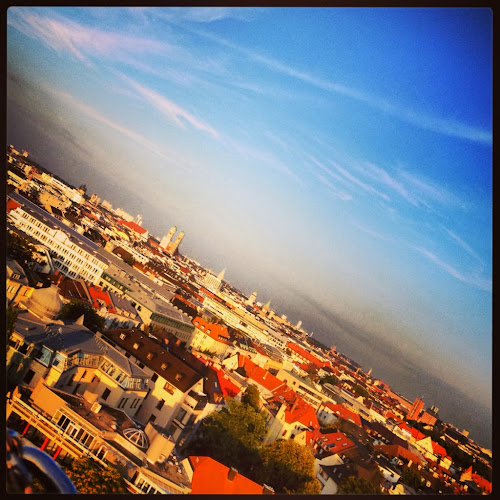 I should preface this with, yes, Oktoberfest is held predominantly in September. The highly complex and complicated reason for this is that the weather is just better. From Munich Hauptbanhof (central station) I caught a local train to the suburban stop of Riem and wandered towards my camping ground for the next few nights which, in a past life, was the 1972 Olympics Equestrian stadium. Not really knowing what to expect from Oktoberfest and traveling on my own again, I decided to sign up for a small event tour, much like I had for La Tomantina in Valencia. The company I went with is called First Festival Tours and I'd heard good things about them from other people. I got to the campsite, checked in and dumped my stuff in the tent. Apparently camping equipment (other than the pre-made tent) was not provided. Fortunately I carry a small sleeping bag in the bottom of my pack and I was too stubborn to pay the outlandish fee to rent a sleeping mat. I'm not saying it was a comfortable nights sleep for the next four nights, but the beer definitely helped. 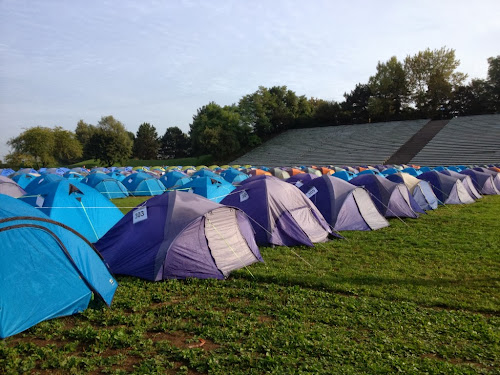 I met the other people I was doing Oktoberfest with around the campsite that afternoon and we all made our way into town for some refreshing beverages. I believe having a few drinks before planned heavy drinking is known to professional drinkers (if that's a thing) as 'back-burning'. 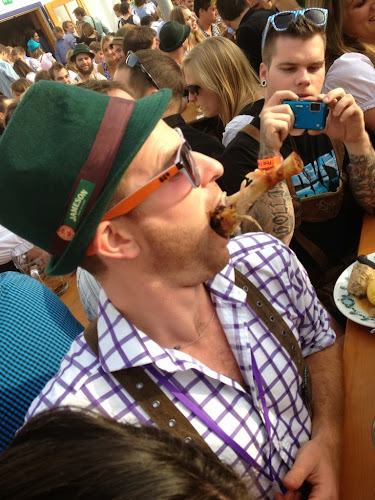 The next morning was the official start of Oktoberfest. Oktoberfest started in 1810 to celebrate the marriage of King Ludwig of Bavaria and is steeped in tradition. On the first day of Oktoberfest (which is always a Saturday) the first beer keg is officially tapped at midday. Unfortunately, despite the huge number of beer tents each holding thousands of people, places are limited and when the doors open at 9am sharp, there is a mad scramble for seats even though no drinks can be served for another three hours. Somehow we managed to find seats in Haufbrauhaus which is where the official keg tapping ceremony was to take place. The atmosphere in the beer halls, even before the drinking started, is completely indescribable. There are people everywhere laughing, eating and thousands of people all singing and chanting to a fairly strange assortment of songs that everyone would know in any language. 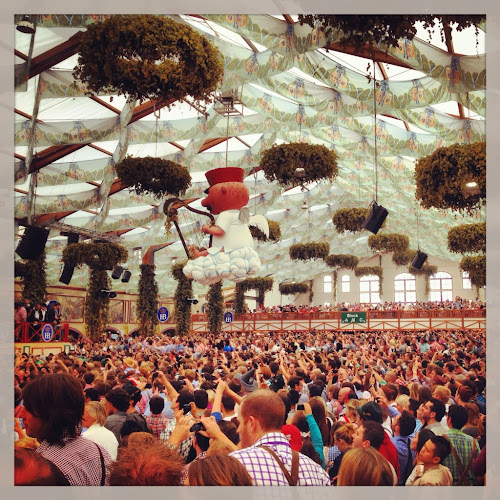 Eventually the keg was tapped at midday and within minutes, the beer wenches (that's a technical term) are carrying out armfuls of steins. It was amazing to see these women carrying out 11 or 12 one litre steins to a table at once. There is an expectation to tip (they happily advertise the more generous your tipping, the better service you can expect) and they definitely do well for themselves but the work itself must be hell.

Getting in on the Instagrams 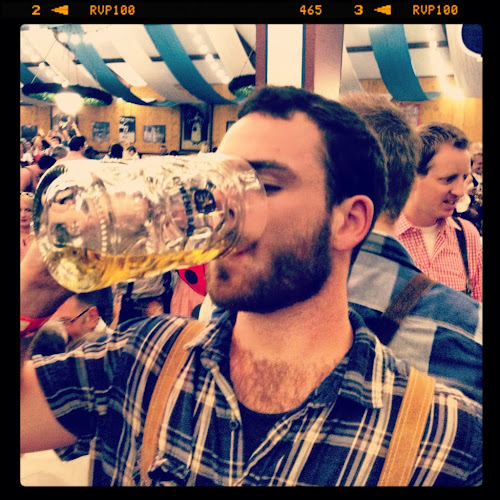 Oktoberfest isn't just the beer halls. It's also a full on carnival that sets up in the centre of Munich for three weeks, complete with rides, stalls and shops. That having been said, the halls are obviously the focal points. Each beer brand has its own beer hall with the larger ones (Haufbräu, Löwenbräu, Paulaner) capable of holding thousands of people seated at long trestle tables and the smaller ones more like large pubs or restaurants. 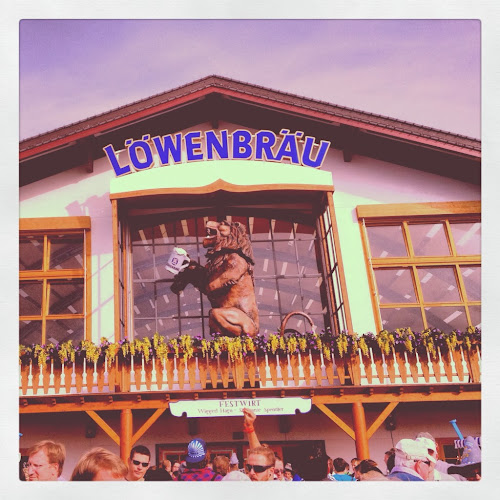 We did take a small break on Sunday morning before returning to the beer halls in the afternoon. First Festival organised a bus to take everyone to a 700-year old monastery outside of Munich. Being a German monastery, the monks obviously had their own brewery and the whole experience was somewhat less religious than you might expect from a monastery. More of an ex-beer-ience, really (you like that one? Feel free to use it). Also the pork knuckle was pretty incredible. 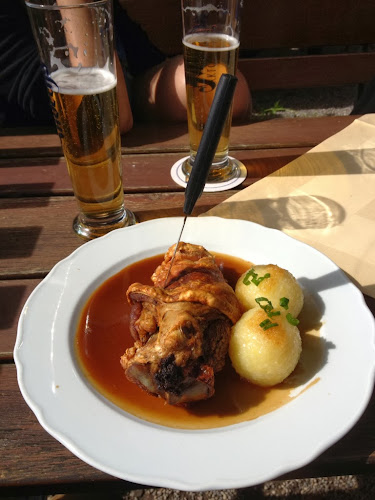 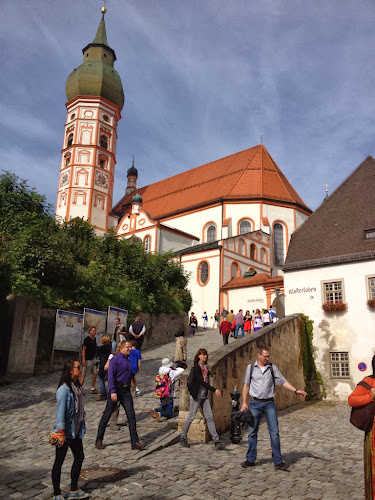 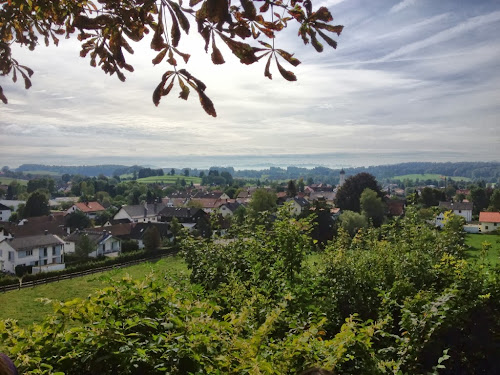 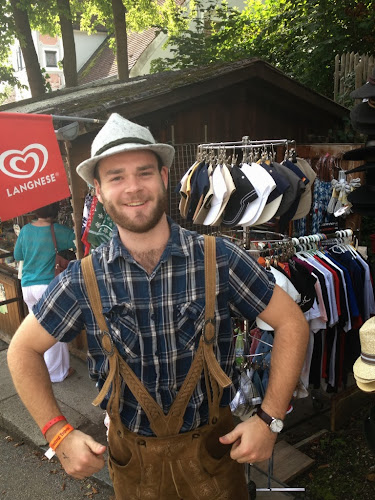 Beer in Oktoberfest comes in one litre steins. One litre! Nobody needs to drink anything by the litre. Similarly, no one needs to spend all day drinking beer and eating pork knuckles the size of my face, but that's what Oktoberfest is about. We dont NEED anything like this at all, yet tens of thousands of people come to Munich for three weeks every year to just drop the pretenses of civilised behavior and just drink beer, make fools of themselves and absolutely destroy their bodies. Giving up our abstract concepts of moderation, modesty and modern clothing and to just completely give in to our desires to just act like animals. And the lederhosen. 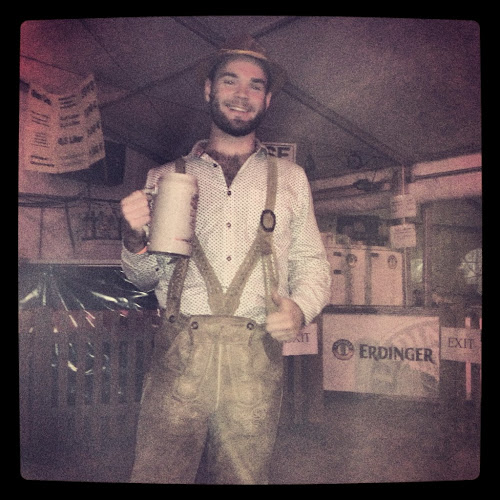 I'm not claiming that I didn't enjoy it, I honestly did. It was an experience absolutely without compare. I would most definitely come back again but with a much better idea of what to expect. Again though, it's the carnival/drunken atmosphere that I think keeps people coming back year after year more than anything else. The excitement, the camaraderie, the sense of fun is palpable and nothing else I've experienced has come even remotely close.