So before you even think it to yourselves like the judgey, know-it-all readers I know you are, I'll just say it. I did my Europe trip backwards because I are dumb. I went to the hot places like Italy, Spain and Portugal in the middle of summer and left places like Ireland, Sweden, and Finland for the winter months. I had every intention of doing it that her way around but, as with most of plans, it didn't turn out the way I hoped.

Anyway, I flew into Sweden in late October and it was cold. Really cold. You just won't believe how vastly, mindbogglingly cold it is. I mean, you may think its cold going outside in winter back home but that's just peanuts to Sweden. I caught a train from the airport to Stockholm Central station (free with my train pass) and the hostel was a short walk from there. It was a pretty good hostel, actually. I'd been there for literally all of about 30 seconds when someone invited me out with a group to go to the cheap, local pub. As it was 1am at this point, I figured why not? It turns out that "cheap" pub is a relative term. There is no such thing as a cheap anything in Sweden. It's a very, very expensive country.

The next day I found a company that ran walking tours through Stockholm. A quick lesson of Stockholms geography. Stockholm was originally built on a series of small islands. These islands are all connected with old, stone bridges and the Oldtown is quite adorable, for lack of a better word. The Newtown is built on the mainland and is not that different to other European cities but I decided to explore both since i was in Stockholm for a few days. The first day I did a walking tour through the Newtown. It was interesting seeing some of the more recent buildings and events of Stockholm's seven-hundred year history. As I said, though, shopping districts and to halls don't really vary hugely from city to city. Stockholm did have even more H&M's than most places though (because they are a Swedish company, I found out). H&M are just a clothing company but their clothes are quite cheap and fairly nice. I'm not exaggerating when I say that nearly everything I own is from H&M. In fact, my shoes and my hat are the only thing I'm wearing that I didn't buy in H&M. There were ten H&M stories in Stockholm's main street. Between that and Ikea, the Swedes really are taking over the world. 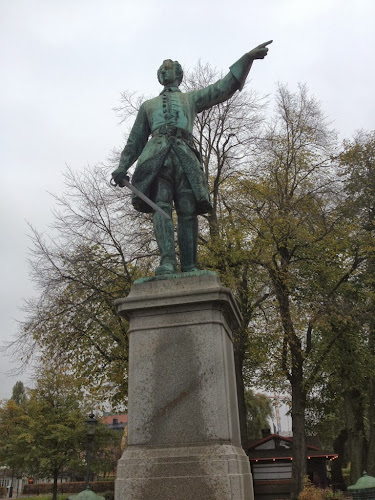 Also, I saw the hall where (5 of the 6) Nobel Prizes are awarded. After the Newtown tour finished, I went and bought myself a warm winter jacket (from H&M because obviously) then had a nap to catch up on all the sleep I didn't get the night before, before I went out again that night with everyone from the hostel. 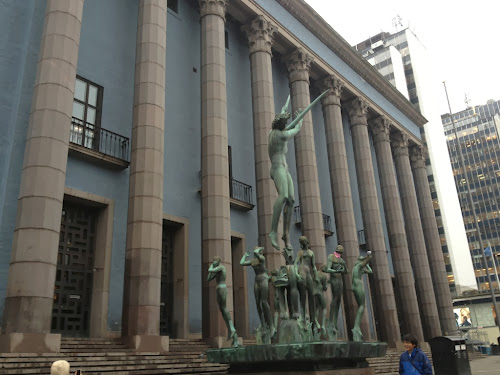 The next day I managed to meet in time for the 11am start to the tour of the Oldtown. This was the much more interesting part of the city. It wound through the cobble streets and narrow bridges, past the old churches and the royal palace. 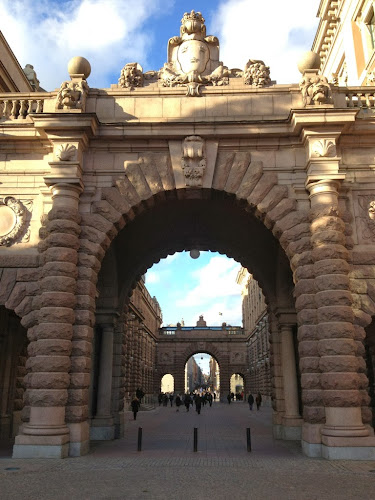 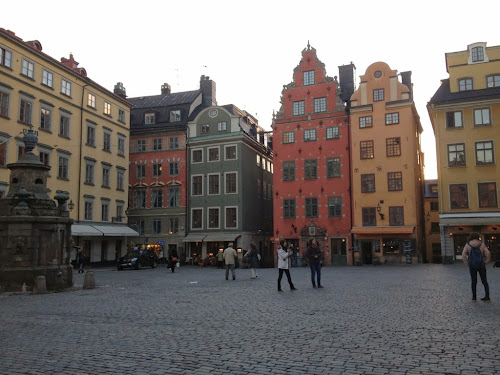 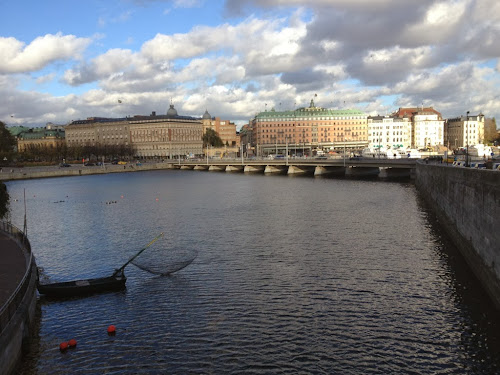 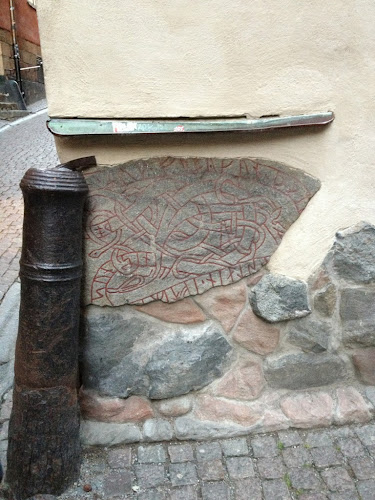 That night I went out with most of the hostel for the third night in a row. My train to Norway was at 6:30 the next morning so I just didn't sleep that night. I figured no sleep was better than only an hour of sleep and I feel I made the right call actually. It gave me time to wander around Stockholm and watch the sun come up which was magical. 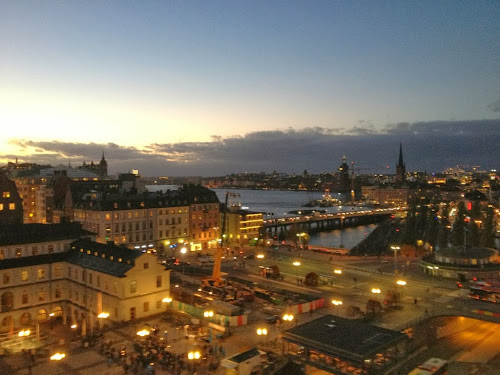 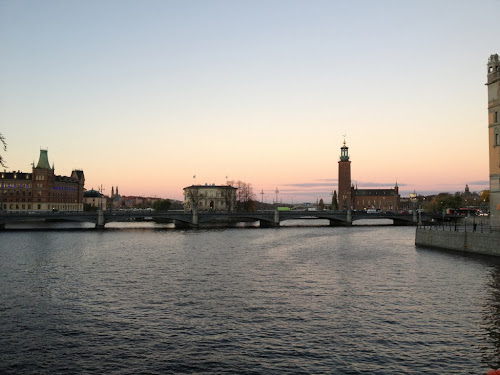 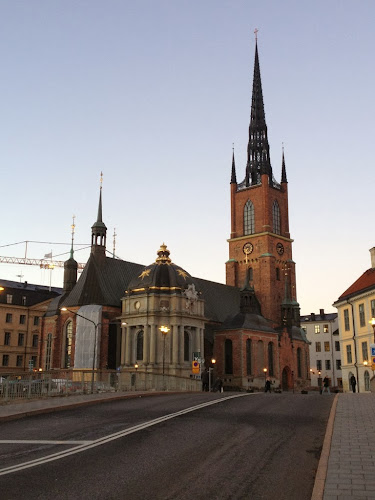 I'm fairly behind on my blog still (again) so I'm struggling with a few of the details here but I can say without question that I really liked Stockholm. Even though it was cold and expensive, it was also clean and quaint and Swedish people are all friendly (and I didn't meet a single person who didn't speak flawless English). I know I like everywhere I go but I'd really recommend Stockholm to anyone who wants get off the traditional London-Paris-Berlin-Rome Europe trip route. It's probably one of the nicest all-round cities I've visited in Europe.

I caught the train to Norway the next morning after a night without sleep. I slept part of the way to Oslo (understandably) but the parts of the trip that I was awake for were amazing. It was exactly what you expect rural Sweden and Norway to look like, with the snow capped mountains, forests of pine trees and deep, clear lakes glimmering blue in the pale sun. I'd love to be able to come back with more time (and a lot more money) and explore these countries properly. 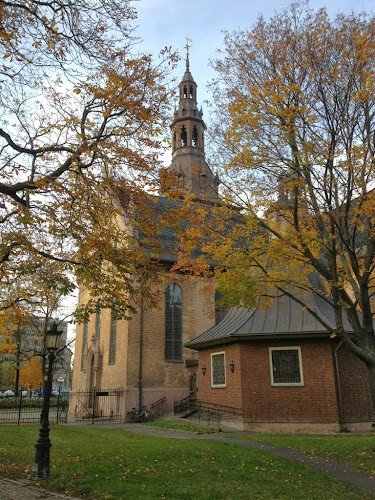 Oslo itself was small but nice. I'd been told that I only needed an afternoon in Oslo and after an afternoon, I agreed. It's picturesque and very Scandinavian but there really isn't much to see. Norway's true beauty lies outside of the main cities, I suspect.

Oh, and Norway made Sweden look super cheap. Which it wasn't. Norway literally has too much money, to the point where it's a serious economic problem. #firstworldproblems

Ryanair have a terrible reputation, for anyone who doesn't know. More than in Australia (and about a trillion times more than North America) Europe has a very strong competition between low cost airlines. The two major players are Ryanair and Ezyjet but there are many smaller companies willing to fly people across Europe for the cost of a nice meal (including but not limited to Monarch, Wizzair, Flybe, Norwegian Air, Air Berlin, Pegasus, Mediterranean Air, etc...). Out of all of them, Ryanair is the only airline with a reputation for giving you exactly what you pay for. While some airlines might consider things like seat pockets or cabin baggage larger a small backpack things that passengers might reasonably expect, Ryanair really couldn't care less. Ryanair is also unfortunately, quite often the cheapest airline around and the way they do that is simple. If you have a normal size carry on baggage, then that's too big and you'll need to pay a substantial fee to bring it on the plane. Similarly, whilst every single other airline ever is quite happy to simply scan the e-boarding pass on a smartphone (which they themselves emailed to said smartphone), Ryanair refuses to both scan a phone screen and to print off a boarding pass for less than a €72 fee. That's how my €19 flight turned into a €91 flight. Ryanair can go die in a hole.

Posted with Blogsy
Posted by Les Betchos at Friday, November 15, 2013