The thing about Las Vegas is that it's exactly what you expect and we certainly had expectations when we arrived. On the one hand, Vegas's legacy is built upon its reputation as a dirty, corrupt, tacky, overpriced cesspool of casinos, strip clubs and wedding chapels. And it so totally is. However, on the other hand, Vegas is literally the only place in my entire trip where EVERYBODY said I had to go. Literally not a single person said not to bother, which is more than I could say of anywhere else I've ever been. Of course, they mostly all said to stay only three days and they were right, but I'll get to that. 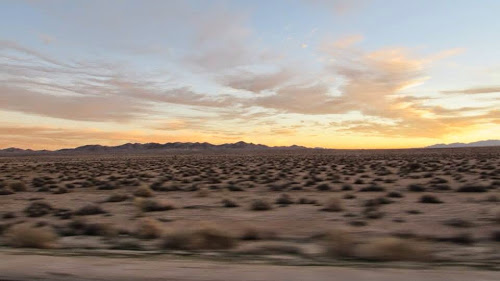 We drove into Vegas into night which is probably the best time to see Vegas for the first time because as you approach the glowing beacon of lights in a sea of darkness you really get a sense of what Las Vegas is. It's a literal and metaphorical oasis in the middle of a desert. Our hostel was on the strip (although not in the main area with the big casinos) so we got to drive down the strip past all the casinos we'd only heard about in the movies. Caesars, MGM Grand, Luxors, The Wynn, The Venetian, Treasure Island,The Palazzo. The few snaps I got driving in at night a barely worth showing though. 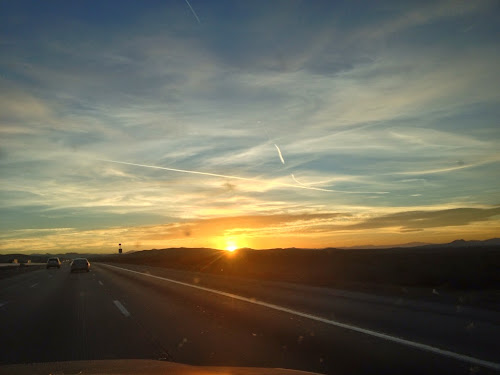 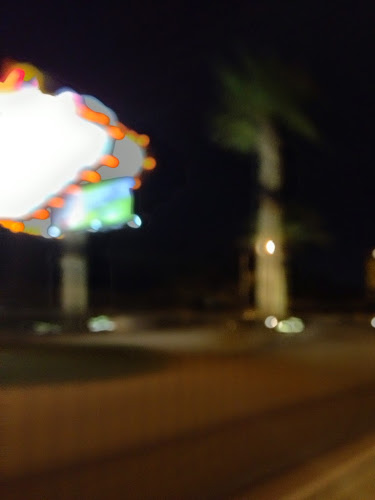 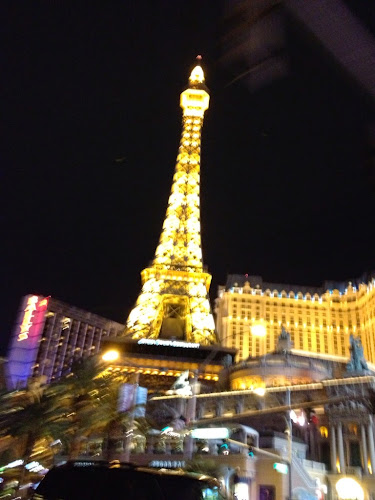 Our hostel was a good one (Hostel Cat. I still remember what it was called and literally struggled to remember how to spell my own street address today so that means something), centrally located between a wedding chapel on one side, an adult store on the other and adjacent to a second wedding chapel because its Vegas and the stereotypes are true. Additionally, part of 'The Hangover' was filmed in the hostel. Specifically the part where they go to the wedding chapel and get attacked by Chinese gangsters. Surprisingly, the film makers thought it would be better to build a fake wedding chapel in the hostel car park than use the two wedding chapels that were literally a few metres away.

The hostel also ran outings and whatnot for guests which was a good way to get and out and see the some of the cooler things at night. The first night we just went out, walked around some of the casinos and had a look around. We even joined as members of Wynn and gambled away our complimentary $10 starting money. We got free drinks, though. 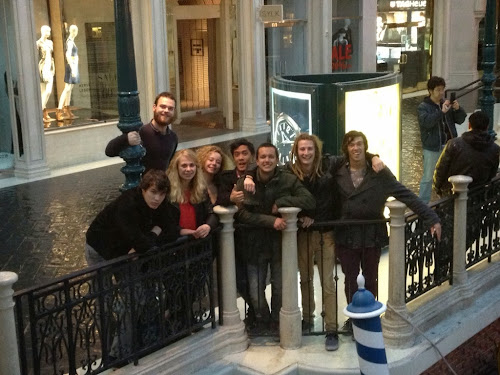 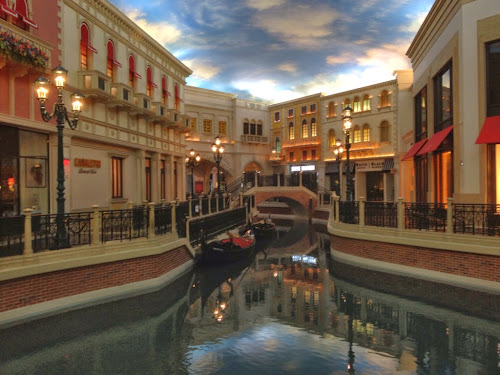 They really go all out in Vegas 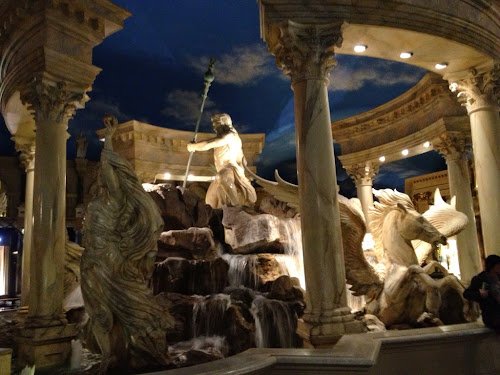 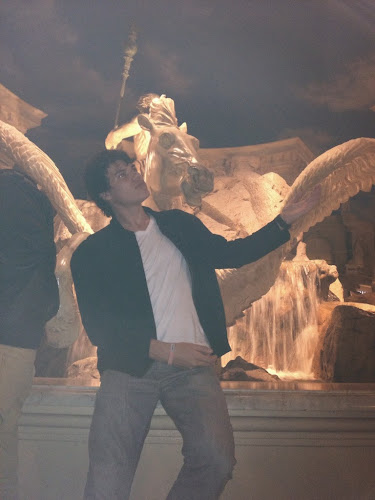 I have no idea what's happening here

This is Vegas, however, and things can be a bit backward there. 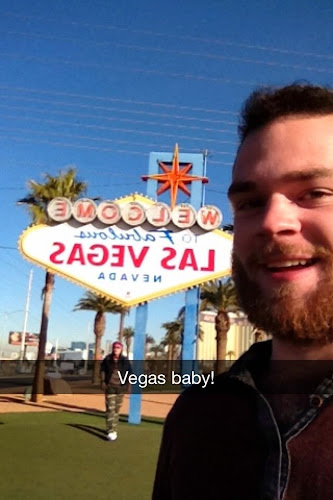 With that in mind, how many people do you think we fit in this van that we drove up and down the strip, too and from the casinos? 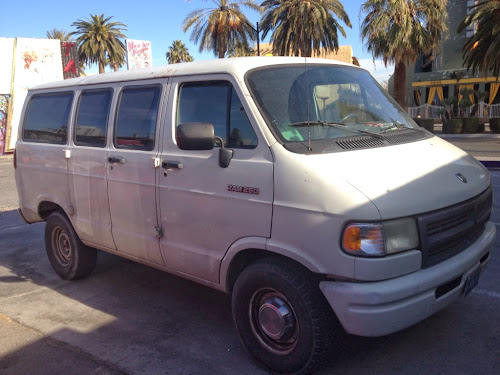 That's a rape van if I ever saw one but how many people/bodies can it hold?

The next day we bummed around and explored Vegas some more, checking off some of the most important 'to-do's like the Vegas sign and In-n-Out Burger. 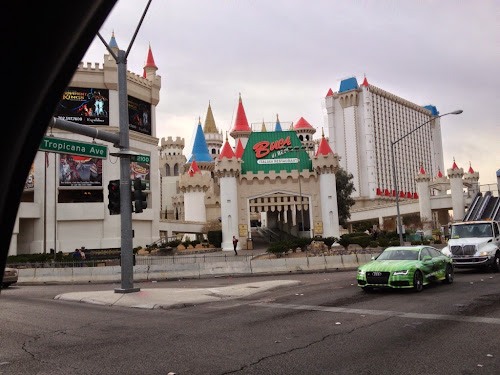 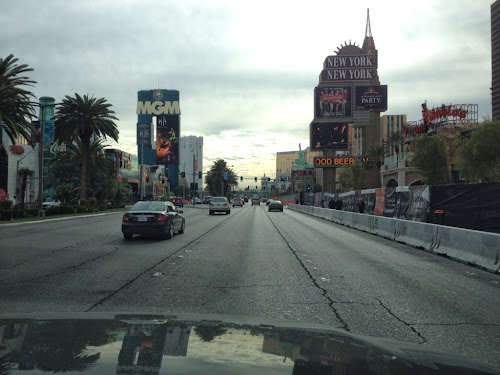 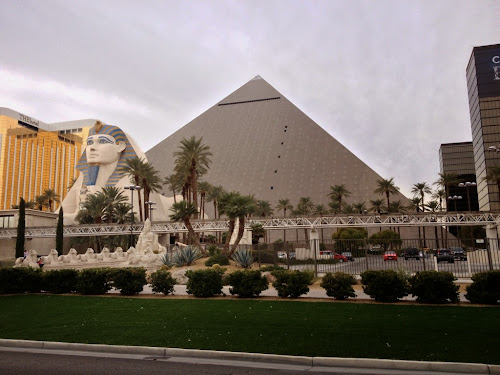 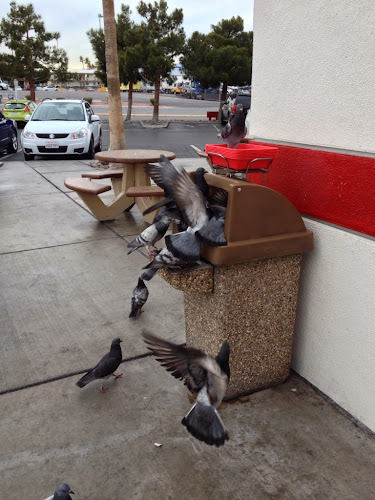 The pigeons enjoy In-n-Out as well

That night we checked out the bar districts and found a place that sold 25c beers. Yep. You read that right. The cheapest beers I found in the whole trip were in Las Vegas. I'm not saying it was good beer (it wasn't) but I wasn't arguing at that price. 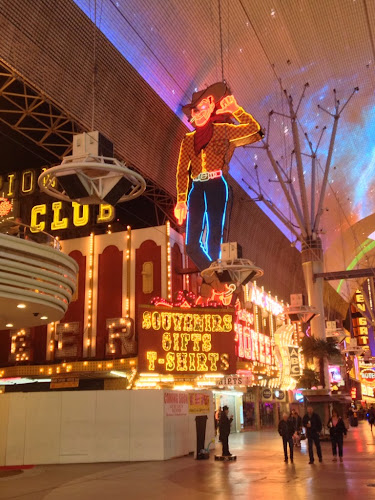 While we were so close (close being an incredibly relative word) we decided it would be a waste to not check out the Grand Canyon. We still had the Tank, so we decided to drive it out to Arizona and back for a day trip which was fine when we thought it was a 5 hour return trip. It turned out that it was actually 5 hours either way but we didn't learn that until we had fiddle-farted around in the morning then stopped to sightsee at the Hoover Dam. 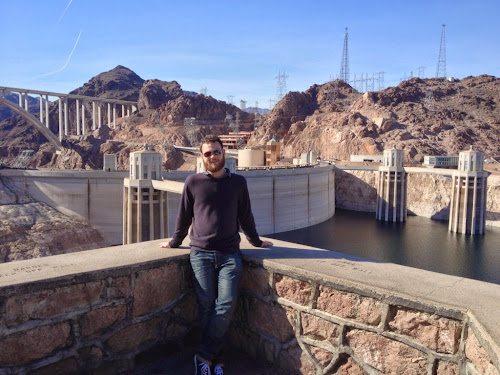 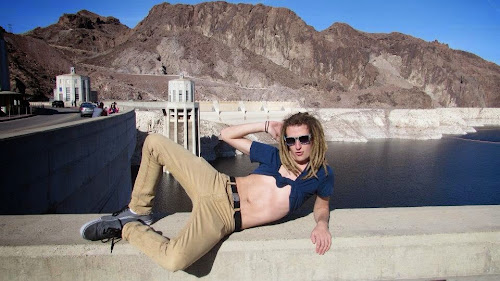 I feel this picture needs to be on the Internet 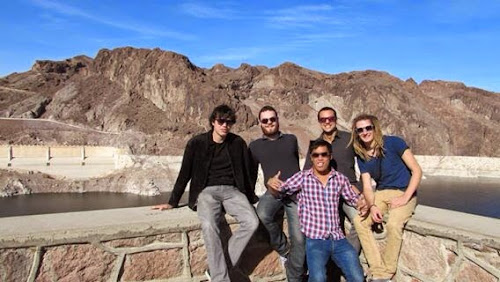 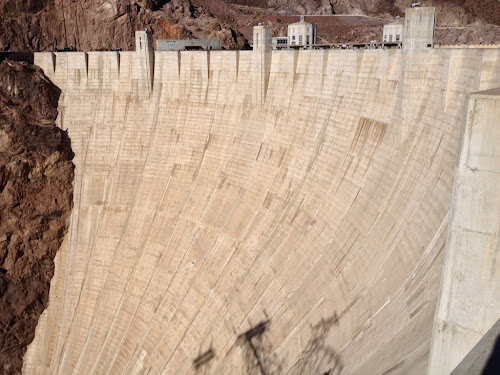 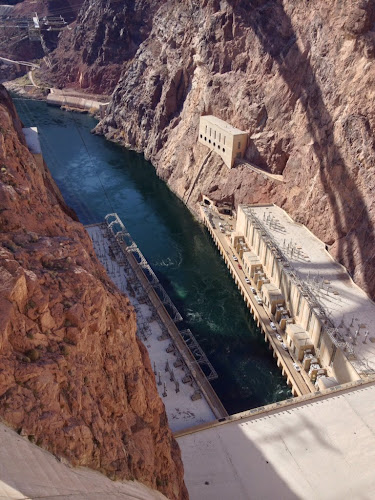 Once we realised how far we still had to go to get the Grand Canyon before it got dark, we really decided to hurry. I'm not saying we broke any speed limits at any point because that would be ridiculous but I will say that for a vehicle as heavy as a medium-size elephant, the Tank was very good at breaking speed limits.

It's ok, we're all very safe drivers though. 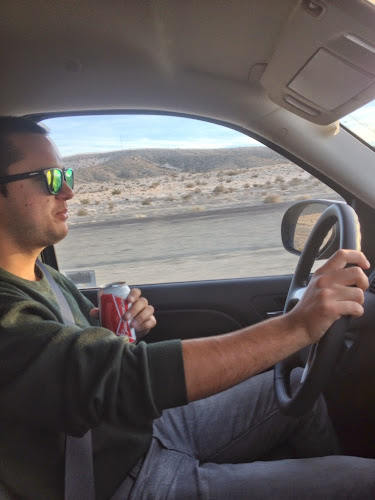 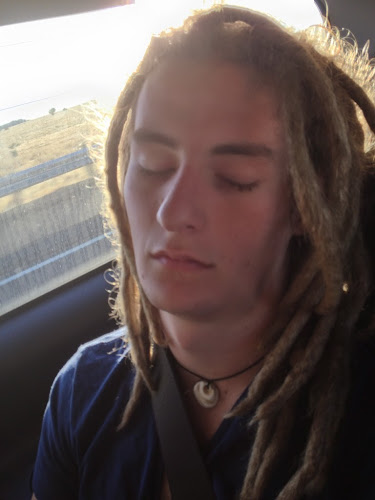 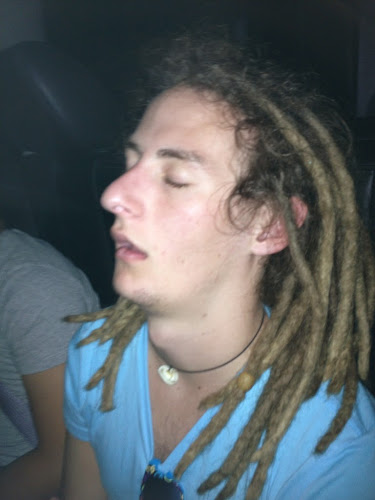 We ended up arriving at the Grand Canyon with about 10 minutes of light left before we had to turn back towards Vegas. 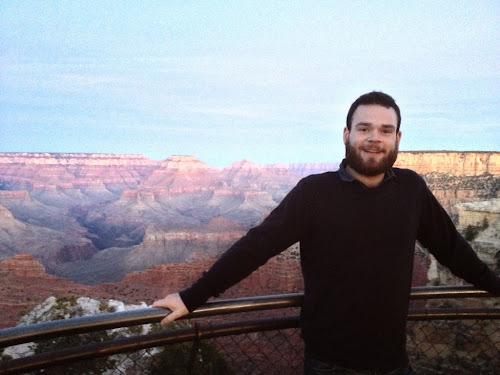 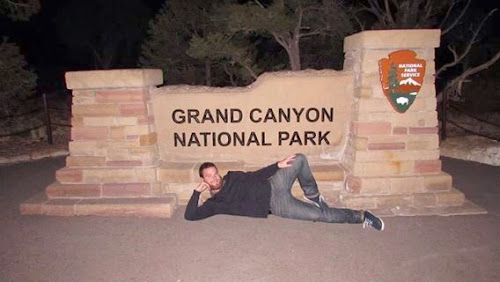 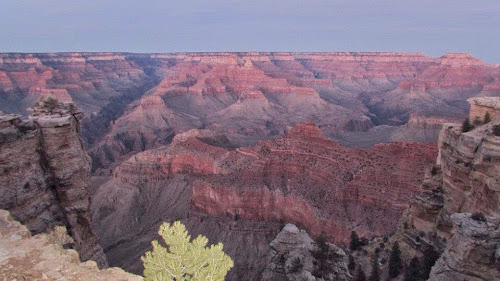 The next day we headed back to LA, after stopping in at a Pawn Shop that is apparently famous or something. Apparently it's on TV but I can't keep up with the kids these days with their pop-able cultures and their book-faces and their iron-pads. 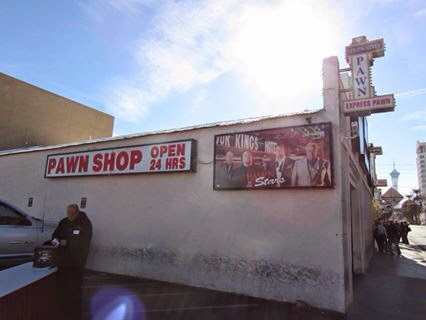 I feel like I'm missing a day but I can't see where? Anyway, we were in Vegas for 4 days and it was probably one too many. Like everyone told me before we went, Vegas is a great place to visit for about 3 days and I would strongly recommend it. You just need to know what to expect when you get there. Hint; Expect the expected. 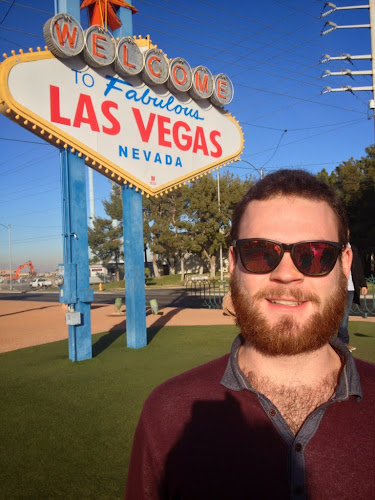 Oh and did you guess how many people we fit into that van? Go take another look then scroll back down. I'll wait. 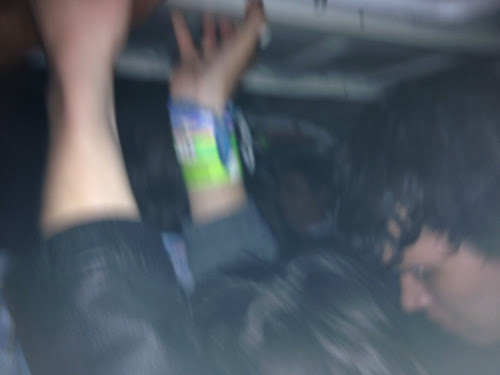 Hint: this is how it looked 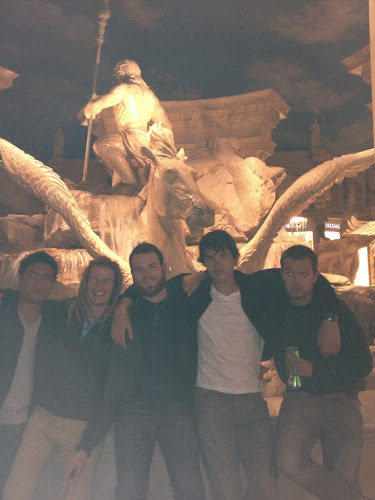 Posted with Blogsy
Posted by Les Betchos at Tuesday, April 08, 2014