Well this is it. After 8 months of travel and 11 months of blogging about that 8 months, it's finally come down to this; You, me and a gun. The last of #aroundtheworld2013.

When we last saw our intrepid travellers in the penultimate installment of their shenanigans-ridden adventure, they were just leaving Mexico City to fly back into the USA. Now, back to first person!

Chuck and I arrived at LAX that afternoon and began to make our way through customs. The US has a reputation for ridiculous border security and, although I didn't doubt for a second that it was true (stereotypes exist for a reason), I hadn't had any problems in any of my border crossings into 'Merica! That is, until I got to LA and they decided it was incredibly suspicious that I'd been to Mexico twice in as many months. After an uneventful bag search which I'm not going to make any jokes about because I'd like to be let back into the country (Hello NSA!), we were back on our way.

Chuck was flying back to Australia the next morning and I was leaving the day after so we couldn't go far. We had booked a hostel right down on Hermosa Beach, which is quite close to Venice Beach and the airport. Chuck had an early flight and we were both tired so we didn't have a huge night. We had sushi, explored Hermosa Beach and had a few beers then headed off to bed. Chuck left the next morning and I decided to make the most of the last day of my trip. On a spur of the moment decision, I booked a train ticket from LA's Union Station straight to San Diego. 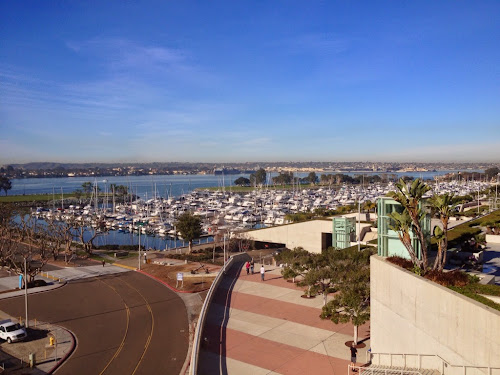 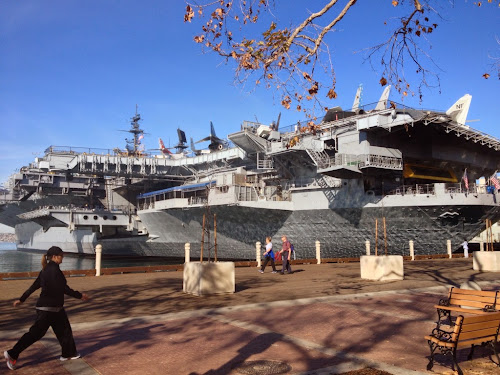 I'd heard San Diego was a great city and it had been recommended to me by a lot of people but honestly, the biggest reason for going was because that's where the movie "Anchorman" was set and you best believe I said "You stay classy San Diego, I'm Ron Burgundy?" a lot.

San Diego is actually an awesome city. For some reason I didn't take a lot of photos but its pretty nice. It was founded by the Germans in 1908 although the original meaning of the name "San Diego" has been lost to history. I explored Gastown and walked around the bay but soon it was dark and I retired to the hostel which, coincidentally, was one of the coolest I stayed in. USA Hostels in San Diego, check it out if you're in the neighbourhood.

I woke up early the next morning, for the last time before I got back to Sydney, and caught the train back to LA. There was a shuttle bus from the train station straight to LAX and before I knew it, I was in the airport waiting for my plane home. 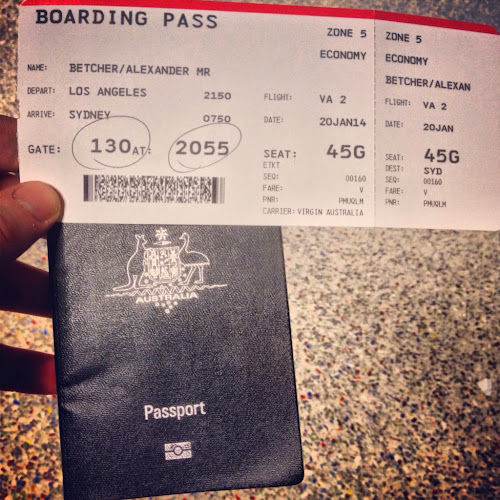 It was a fairly uneventful flight. Honestly, I slept nearly all of it so I actually felt fine when I touched down back in Sydney. It was weird but great to see all the familiar landmarks as we circled above the city before we landed and when the customs officer said "Welcome home" I was surprised with how relieved I felt. I was surprised with how happy I was to be back. It's not that I was finished traveling. I want to get back out there and keep going ASAP but I think I needed to come back home and catch my breath for a moment.

From the very start, I'd been planning a little trick for my homecoming. I'd deliberately told everyone that was arriving home a day later than I actually was which means when I lamded and Kate picked me up from the airport, I got to surprised the hell out of everyone when I walked in the door a day early. 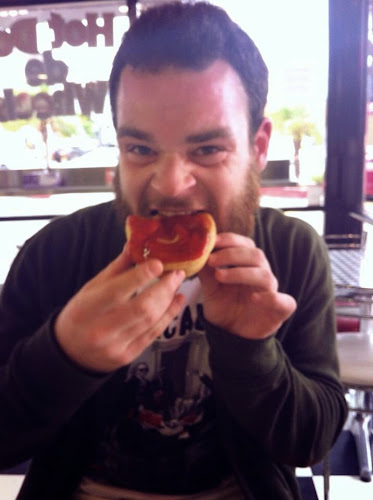 After stopping for a breakfast meat pie on the way home because after 8 months, you better believe I was having withdrawals!

That was my trip. I'll post something after this that I wrote about what I learned but for now, this is something I wrote the day after I arrived home, when I was still super far behind in my blog.

Well this is it. The end. This will be the last post for a while but hopefully not the last. I'll get to that later. Now is a time to reflect on the last seven months and what I've gained from it all.

Firstly, thank you to anyone and everyone who took the time to read anything I've posted here. When I started keeping this blog, I didn't expect anywhere near the reception it received. I thought it would just be my mum sitting at home, refreshing the page every ten minutes in case there was an update. When I saw the amount of traffic and hits the page was getting, that's exactly what I thought must be happening but apparently that wasn't the case. So again, thank you to everyone who read it and I hope you enjoyed reading it an awful lot more than I enjoyed writing it.

I've been back a few days at the time I'm writing this and a definite trend is forming in the questions I've been asked so I'll try and address as many as I can now.

- where was your favourite place? That's a tough one. The really wasn't anywhere I didn't like (that's another common question) but there are a few places the stand out above the others. Budapest, Portugal, Greek sailing, Turkey, Sweden, Ireland, San Francisco and Mexico City were standouts but, again, there wasn't a place I didn't enjoy.

- where was the best food? Again, a tough one. I'd say its a toss up between Turkey, Germany and Italy but, again, there wasn't any country where I disliked the food. I did get pretty sick of American food pretty quickly though.

- are you glad to be home? Yes and no. I've definitely gotten the travel bug now. There's no way I can sit at home and not be planning my next trip (again, I'll get to that in a minute) but I did need to come home and recharge. Seven months of little sleep, a worse diet and borderline alcoholism pretty much destroyed my physically. As I've mentioned before, I'm a definite introvert and people ask how I survived with people in Europe for so long. Well, I was traveling solo is the answer. Traveling around America and Mexico with my friends exhausted me a little bit (and that's not a comment on them at all and they know that. That was a different kind of exhaustion so, coupled with the physical gauntlet I'd just put my body through, I needed to come home and recover. Not to mention I was completely broke and couldn't have gone for much longer unless I'd stayed in Mexico (which, I must admit, was a damn tempting idea).

- do I feel like I've changed in that time? Yes. Yes, I do. You wouldn't know it judging from how happily I let my mum cook and clean for me when I arrived home but I was completely self sufficient for most of my time away. I had to completely look after myself which is obviously going to be an eye opening experience and force you to grow up a lot in a short time. It was more than that though. It wasn't just a case of I had to wash my own clothes and cook my own meals (that's what fast food and ramen noodles are for anyway) though. There was a much more all encompassing sense of I was, to all intents and purposes, completely alone in the world. No one had my back and I was completely responsible for myself. If you want to learn some self dependence, backpack through a non english speaking country.

Obviously there's other aspects to it as well. You really get a sense of both the difference and the similarities of humanity. So many times I found myself in a situations where I didn't understand the language or the customs and yet I could relate to it with absolutely no difficulty and its hard to not feel a sense of connectivity to all people in those moments. Conversely, I found myself in situations that's were so bafflingly different to anything I'd ever experienced before that I really didn't know what to make of them. It expands your mind, as well as your horizons.

Part of the reason I was thrilled to be away for so long was that, by the time I got back, I would be so disconnected from my old life that I wouldn't be able to go back. That's not to say my old life was bad but I knew I could make it better. Now that I'm back, I'm happy to say I think it worked. I'm actually having to think as I try to readjust back into Australian life. It goes eying the fact I've forgotten my ATM PIN number. This is a chance to essentially rebuild my life as I see fit and that's what I plan to do. I want to get into shape, I want to go back to learning an instrument, I want to learn Spanish and a whole heal of other things. Whereas before they might be something I would decide to do, now I have a chance to make these and other things who I am. I'm looking forward to reinventing myself. I applied for a job as a guide for a free waking tour company in Sydney, although I haven't heard back yet. I'm continuing with the same university course though because, like I said, not everything I did before was bad.

I'm already planning my next trips away. 2015 is going to be a university exchange to South America somewhere. I'll study for a semester or two and travel in my breaks. As much fun as I had and as much as I would super-duper strongly recommend a long backpacking trip like mine, I don't really feel the need to do it again. Is one of those things where, if you do it properly, once is enough. I want to live in South America for a while and perfect my Spanish and feel like I have a real home there. The next trip is back to Iceland and Eastern Europe in 2017 for a few months, but nothing crazy like this trip. Hopefully I'll be able to do a few short trips to Asia in between as well.

I plan to keep this blog in stasis until then. Hopefully I'll write about my future travels and, even more hopefully, someone will actually care enough to read it.

Thank you again to everyone for your continued support during my travels. Until next time, adios. 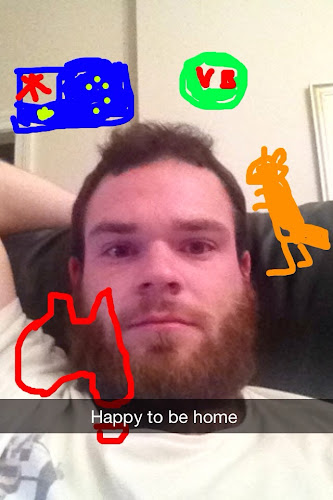 Posted with Blogsy
Posted by Les Betchos at Thursday, May 08, 2014